I always seem to return to wired peripherals. After a year of using the Apple wireless keyboard I put it in the closet and began using the wired compact Apple keyboard. I just hated changing the batteries out every few weeks. With the Apple Magic Mouse it felt like it ate batteries much quicker and it had some occasional issue where it would only have about 6 inches of freedom away from my MacBook Pro before it would behave erratically, as if it had lost signal despite good battery level. I finally had enough with the Magic Mouse and picked up a Logitech G500 mouse today. 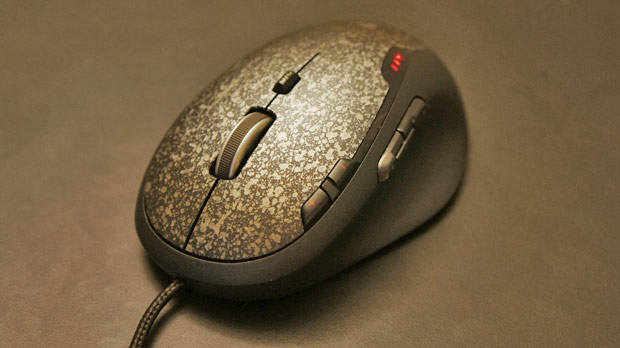 Unfortunately, the G500 is giving me issues too. I realized the issue lies with OS X instead. Mac OS X does not deal well with high resolution mice and their respective high USB polling rates. The G500 natively reports 1000 times per second. OS X feels more comfortable with a polling rate of around 125Hz. What happens is that at low speeds, the cursor becomes jumpy and feels like it moves erratically 3-4 pixels at a time in various directions. A simple test is trying to draw a diagonal line in Photoshop at low speed. Not so easy.

Until Apple releases some kind of fix for this, a pseudo-fix that lessens the effect currently appears to be connecting the mouse to a Windows PC running the Logitech SetPoint software and lowering the polling rate there. The G500 and other high-end Logitech mice have internal memory and will store this setting and use it natively regardless of the host OS. As such, after changing that setting and connecting it to a Mac it should work properly at low speeds.

I tried getting this to work in my Windows VM but no such luck. VMware Fusion is finicky about reporting the true hardware device details to the OS so the mouse just appeared as a generic HID device that the SetPoint software would not recognize. I tried forcing a driver update on the HID device, which worked but SetPoint was not fooled. I'll have to wait until I find someone with a PC I can use for 10 minutes.

If you're considering getting a gaming / high-resolution mouse and using it with OS X, keep this in mind. It might not bother some people as much but when I'm mucking around in Photoshop or trying to accurately place a cursor accurately somewhere in the terminal or a code editor, it gets frustrating.

This blog post has a lot more about the issue and a running list of affected mice. People there seem to have better luck with Razer mice as Razer at least includes some OS X software; Logitech doesn't officially support their line of high-performance mice on OS X.

What's your mouse of choice? Wired or wireless?