For the past few days, 17 universities throughout North America have been striving to come out on top in the final competition of a four year program. Challenge X: Crossover to Sustainable Mobility is a competition setup by the U.S. Department of Energy and General Motors to teach real-world engineering skills to students while taking a stock 2005 Chevrolet Equinox and re-engineer it into an more efficient and environmentally-friendly automobile without sacrificing performance, utility and safety. The competition urges students to employ technologies that reduce petroleum energy consumption, reduce emissions, increase pump-to-wheels fuel economy and provide near and long-term solutions to significantly reduce well-to-wheels energy consumption. 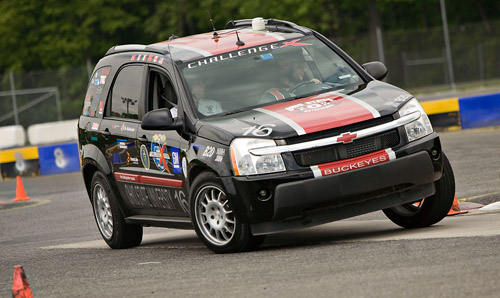 In plain English, that means Challenge X teams brought out some amazing vehicle designs with modified Equinoxes sporting everything from B20 turbo biodiesel hybrid and E85 hybrid systems to fuel cell hydrogen systems. The challenge began on May 13th in NYC and ends in Washington, D.C. on the 21st. The extensive competition includes acceleration tests, emissions checks, autocross runs and a lengthy road rally to accurately test real-world fuel economy. I had the chance to meet the teams, their vehicles and ride around with them and drive their vehicles myself.

When the U.S. Department of Energy announced the competition, they allowed accredited North American universities to apply. Initially, over 100 universities expressed interest but only around 70 teams actually applied. From those teams, 17 were selected to compete based on various metrics.

The first year of the competition emphasized early vehicle design including simulation, powertrain testing and intensive modeling while following the GM Vehicle Development Process. At the end of the first year, the teams received their GM-donated Equinox and spent the next two years integrating their powertrain and then completing vehicle deployment. The fourth and final year focused on static consumer acceptability, telematics and other innovative technologies aimed at meeting consumer demands for safety, security and convenience. The final year also introduced an outreach program that spurred teams to visit schools and inform students about sustainable mobility and their designs as part of a comprehensive marketing program aimed at promoting Challenge X. 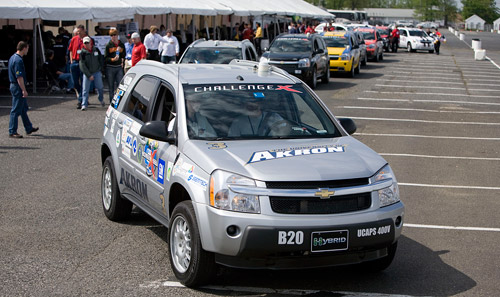 Enough with the details, let me show you some of the cars. For full technical specifications of what each team is running, you can view this chart [PDF]. Some of the cars were plug-in hybrids while others relied on engines to charge their battery packs as well as drive the car. On the other hand, the University of Michigan Equinox used a Biodiesel engine to fill hydraulic accumulators. Unfortunately, their car was unable to make it up to this event.

Everyone's favorite team seemed to be the most technically complex: the University of Waterloo's hydrogen vehicle. The massive aluminum and carbon fiber 5,000 PSI hydrogen tank is shown above. Hydrogen is used by the fuel cell to create electricity used to power two 67-kW electric motors. A backup 60-kW battery pack is onboard to meet heavy acceleration demands. I drove the Waterloo Equinox at GM's Media Ride & Drive Event around Central Park in NYC and noticed a few things about their hydrogen-powered car:

Waterloo's car (on the right) during the acceleration event.

After speaking with Waterloo's team leader, I found out that they had to take out the car's frame rails to accommodate the fuel cells, all-the-while building a cage inside the vehicle to sustain the structure of the unibody. As for the safety concerns that commonly arise when dealing with pressurized flammable gases, the car has 8 hydrogen leak sensors and the carbon fiber shell on the aluminum tank is designed to not let pressurized hydrogen explode should there be a leak. The skeptic in me would like to see that claim crash-tested.

Unfortunately, Waterloo's car tops out at ~67 MPH and hydrogen fueling stations are not commonly available. The car only achieves the equivalent of 25 miles per gallon and with only a few kilograms of hydrogen onboard the range is limited to 100 miles, something I can overlook since the only exhaust output is pure water. During the rally, a special stop at Air Liquide in Delaware had to be made for them to refuel.

As I've mentioned earlier, this final Challenge X competition featured vehicle performance testing in the form of acceleration and autocross runs, as well as fuel economy throughout the rally. However, there is a lot more to Challenge X. Each team must publish a technical report and submit it to a journal, progress reports were required throughout the year, an on-road safety evaluation focusing on NVH (noise, vibration and harshness), on-road emissions testing, well-to-wheel greenhouse gas emissions testing and several related tasks.

While individual events may earn universities small amounts of money, there is no overall prize for the winner, just the glory. General Motors hopes to engage students in the automotive industry and tap into the research at universities and hopefully develop technologies that reduce vehicle dependence on petroleum fuels. Don't be surprised if you see some of the technology in these cars in consumer vehicles in a few years.

Penn State going through part of an autocross track. 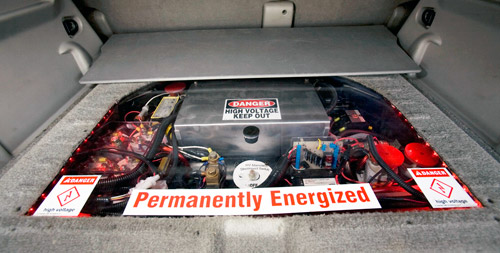 Since all teams used run-flat tires, they were able to use their trunk space for more interesting things. 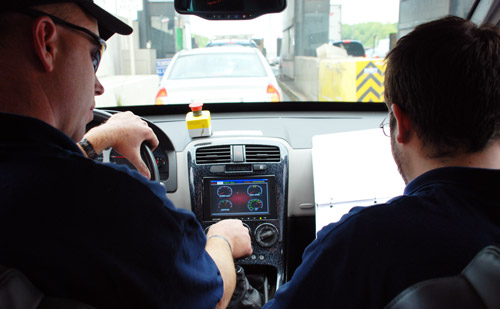 The University of Texas navigating from New Jersey to New York. They have a biodiesel hybrid with a dash-mounted computer for gauges. 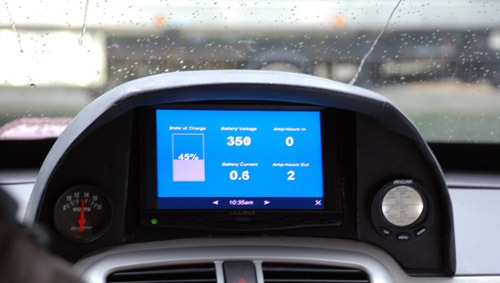 Many more photos can be seen in my Challenge X flickr set.

The challenge officially ends later this week in Washington, D.C. so there won't be any clear winner until then. Organizers made a point to keep some of the scores private to build team anticipation of the finale. I believe the teams are driving from Baltimore today.

However, some of the teams had problems. The first leg of the road rally was from Englishtown, New Jersey to Newark, Delaware on May 16th. I was in a bus for that leg of the ride and when we arrived to Delaware, we were told that several of the teams had issues and would be late by a few hours. As such, teams had to pick two people to stay behind so that drivers could swap off, and the rest went to Baltimore in the buses. It was rumored that Virginia Tech's car, which I rode in from NYC to NJ that morning, did not leave the track due to a Cobasys battery pack failure.

Breakdowns weren't an uncommon sighting, as I learned while riding with the University of Texas team. Fortunately, after working on the car for that long they have already encountered any possible problem that could pop up and know exactly how to fix it. When the diesel particulate filter clogged on the New Jersey Turnpike, it took them no more than 15 minutes to fix. 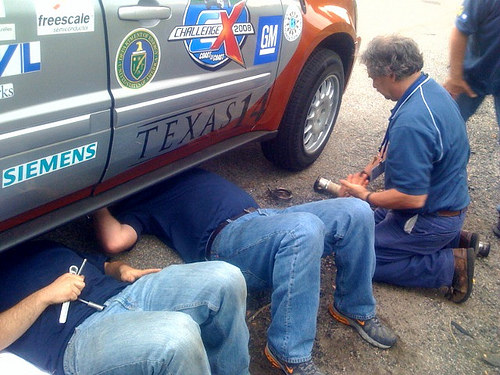 Two UT students and two GM crew from a follow vehicle help fix the car quickly so they don't fall behind the convoy.

If you have any questions about Challenge X or the other teams, please let me know. I learned a lot about the competition and the technology behind the cars and tried to fit what I could in this post.

After the completion of the Challenge X competition, the U.S. Department of Energy announced the EcoCar competition:

The U.S. Department of Energy, General Motors and Natural Resources Canada today announced the 17 teams selected to participate in EcoCAR: The NeXt Challenge, a collegiate vehicle engineering competition set to begin in the Fall of 2008. EcoCAR will challenge university engineering students across North America to re-engineer a Saturn VUE to achieve improved fuel economy and reduced green house gas emissions, while retaining the vehicle’s performance and consumer appeal.

Students will design and build advanced propulsion solutions that are based on the vehicle categories from the California Air Resources Board (CARB) zero emissions vehicle (ZEV) regulations. They will be encouraged to explore a variety of cutting-edge clean vehicle solutions, including full-function electric, range-extended electric, hybrid, plug-in hybrid and fuel cell technologies. In addition, they will incorporate lightweight materials into the vehicles, improve aerodynamics and utilize alternative fuels such as ethanol, biodiesel and hydrogen.

Disclosure: I attended this event on behalf of General Motors.