Okay well it's not quite 1PM EST when Apple's "Showtime" keynote is set to take place, but it's time to prepare your wallet for the festivities. TUAW claims to have gotten the schedule for tomorrow's events, which includes the release of a new brushed metal encased iPod Nano, a widescreen iPod Video, iTunes 7 and Movie Store.

Unfortunately, Tuesdays are jam-packed with 90 minute classes for me, so I won't be able to give you up-to-the-minute news. However, if you visit MacRumors and Engadget tomorrow around 1PM EST, you'll get to be in the know as it happens. I've just about set aside 200 or so for the new Nano; I use mine everyday so it has taken quite a beating.

Stevie J. had a fun-filled event today, that included the revamping of the iPod Nano and Video as well as the introduction of an unexpected set-top box. First off, the Nano has a new iPod Mini-esque aluminum housing in pretty much the same form factor as the current Nano. There is a 2GB Silver edition for 149, a 4GB model in Blue, Green, Pink and Silver for 199 and keeping with the whole MacBook model, an exclusive 8GB Black edition Nano for 249. The Nano also pimps a whopping 24-hour battery life, which should happily satisfy you on your flights to the other side of the world. 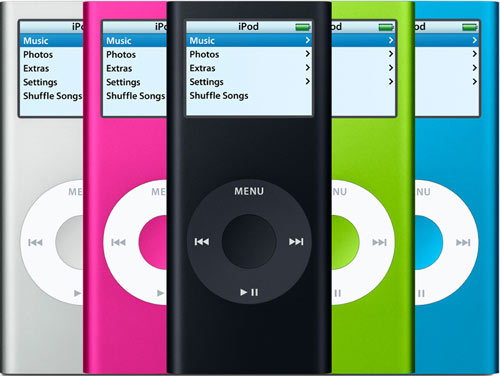 The regular iPod is pretty much the same, but sports a brighter screen as does the Nano, offered in 30 and 80GB versions. They go for 249 and 349 respectively. In addition, you can download games for your iPod via the iTunes Music Store, which by the way has silently been renamed to the iTunes Store, for 4.99. However, the biggest shocker of them all was the new iPod Shuffle, available in a 1GB version only. It is small coming in at under 0.60 ounces. It has an aluminum housing like the Nano, so it too qualifies for free laser engraving. The new Shuffle will only run you 79, if you can wait until it starts shipping in October.

As expected, iTunes 7 was released, supporting movie downloads that run in at 640x480 VGA resolution. Most movies will cost 9.99 going up to 14.99. I encourage you to download iTunes 7 as it is a major update in terms of UI enhancements and features.