Thanks to a comment from Jim Karagiannis, I recently discovered Intype. Intype will be pretty much as close as you can get to TextMate's perfection on Windows. I say "will be" because Intype is only in the early stage of development, but I can already tell it's headed in the right direction. Those familiar with TextMate won't have trouble adapting to Intype's familiar interface. 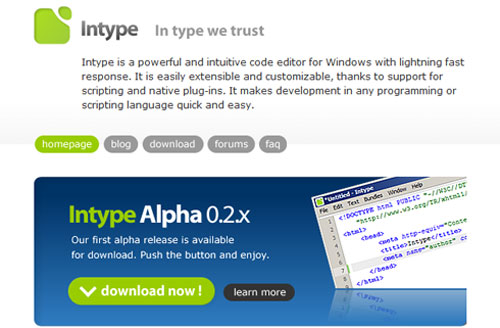 Let me show you a brief overview of Intype's features. First off, you'll notice the stylish green logo - a far cry from the Crimson Editor's goofy looking logo. The main interface is basic and laid out similarly to TextMate with line and column counts at the bottom, adjacent to the language parsing selector. Unlike TextMate however, Intype doesn't yet have a tabbed workspace. 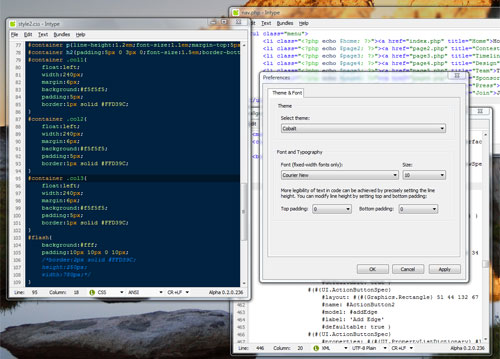 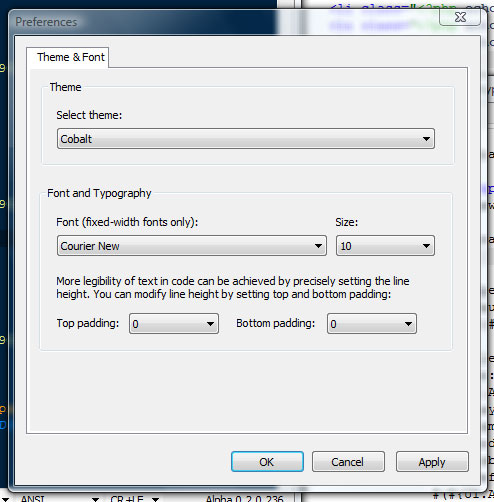 Intype preferences are only basic at the moment, but it has 17 themes. Cobalt FTW. 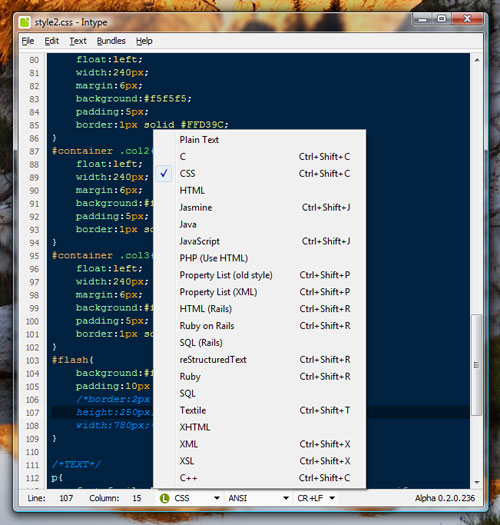 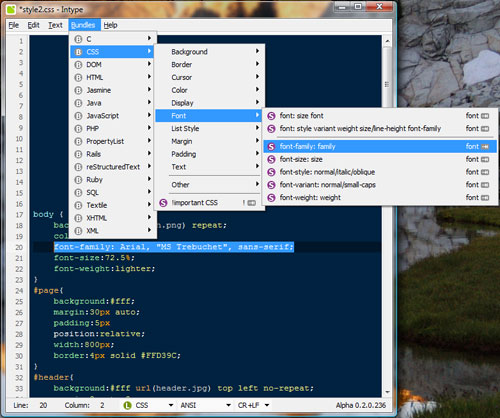 Intype comes with several bundles by default. In the above screenshot, the highlighted bundle menu item created the highlighted text in the CSS file behind it. Intype has growing support for TextMate bundles as well:

TextMate bundle consists of snippets, commands and grammars. Grammars and theme files are platform-independent, they are supported. Commands and snippets use shell code, which is different on Windows and Mac, so it is not possible to transfer them.

Intype is free during the alpha and beta development phases but once it reaches release 1.0 it will be priced similarly to TextMate.

Intype will cost between 25 to 45 (â‚¬20 to â‚¬35). One license will be valid for one version of Intype and all updates for this version (for example version 1.0 with updates until version 1.9).

Is it worth it?

Before you consider switching to Intype completely you must understand that it is in a very unfinished and barely implemented state. I compare it to TextMate in very light terms. Intype has a long way to go until I can write a real comparison review between Intype and TextMate. I do, however, encourage you to download it and peek around. The Intype blog has several screencasts showing off Intype's features and are definitely worth checking out.

What Windows text editor do you use? Will you switch to Intype? Oh I almost forgot to mention: . UPDATE: the current version now has undo/redo.

Update: The next release will have undo/redo as well as drag and drop functionality. Thanks to Avinash for that information. Take a look at the upcoming feature request list.