Twice a year, Intel holds the Intel Developer Forum where software and hardware developers gather to share their latest offerings and propose their plans for the future. The Spring IDF just began in San Francisco today and Intel came prepared. There was a discussion about Intel's success on the 65nanometer CPU fabrication platform and plans to move to 45nm fabrication for RAM chips. Improvements to the Core Architecture, responsible for the current line of Intel processors, replacing NetBurst, were also discussed. These improvements will have the end result of 20% increased transistor performance with 30% lower power usage. Some specific figures for the next line of chips were also announced, all remarkable. The next three chips will be Merom for mobile, Conroe for the desktop and finally Woodcrest for servers (which will feature 80% more performance than the current Xeon line!). There is another thing to look forward to from Intel as well; Kentsfield, the quad-core prototype, on which the entire keynote today was performed. 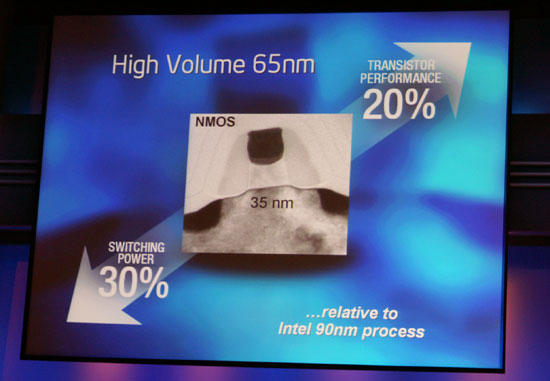 However, the more interesting piece of news from IDF was Anandtech's benchmark showdown of a 2.66GHz Conroe against an AMD X2. The first thing to note is that Anandtech pitted the stock Conroe against an overclocked 2.8GHz Athlon 64 FX-60 (the high end dual-core X2). Well Conroe dominated by 20% or more in every benchmark. Intel may have flopped with their older Prescott Pentium E processor offerings, but the ball is definitely in their court right now. The Core architecture seems to be doing everything right and planning on moving to a 14 pipeline per core setup where four instructions are completed per clock cycle as well as an enhanced SSE instruction set aimed at doing what the PowerPC's Altivec was famous for. In comparison, Prescott has 31 pipelines and generated over 100Watts of heat where as the Core architecture CPUs use 65Watts.

Intel publicly benchmarked a new Woodcrest based server against an AMD-based Sun server. Woodcrest outperformed the AMD server by almost 33%. AMD is cornered right now, and understandably. They have been the performance king for around 3 years now, but things might change. AMD may have lost the performance crown, but with a new line of DDR2 based chips, the competition maybe heating up.