For the past 5 years I have owned the same set of Logitech 2.1 Z-2200 speakers. They have served me well in college and the large subwoofer made for an excellent footrest. However, they are typical "computer speakers" in the sense that they don't accurately reproduce each frequency and provide too much bass, even with the subwoofer on the lowest setting. I guess you could say I've evolved into an audiophile and have realized that bass isn't everything. I like to hear crisp highs and punchy mids as well. That has led me to connect the Logitech's to my HDTV for the time being, and upgrade my computer setup with studio monitors. 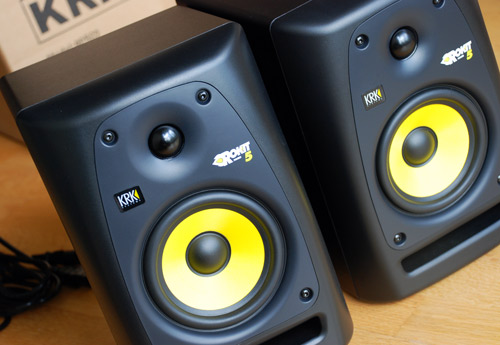 Studio monitors are speakers that have been tuned to have a very flat response. In conjunction with the speakers, a specially built box and baffles to direct the flow of air ensure that no frequency is emphasized more than any other frequency. This ends up producing a sound more akin to how the music you're listening to was actually recorded. Of course, if you want to emphasize certain ranges of frequency, you can always do that in post with software equalizers in your music player.

Studio monitors are often sold individually so you usually just buy two, hook them up to your favorite amplifier, pre-amplifier and audio source, and you're good to go. That ends up being pretty expensive so I started searching for active/powered studio monitors so I wouldn't have to deal with having to setup a big amplifier. I remembered hearing my friend Eston Bond's Rokit RP5G1s when visiting Palo Alto over the summer and was thoroughly impressed with the clarity and range they produced.

Since then the KRK Rokit RP5s have been upgraded to their second generation and sport a slightly different style, but offer the same stellar performance. Each monitor runs 150, so that's 300 for the pair not including shipping (UPS claims the box was 37lbs). For that price, they are still considered entry level for studio monitors. The 5 in RP5G2 stands for 5-inches - the diameter of the main woofer. KRK also makes versions of these monitors with 6 and 8 inch woofers but they are too big to even consider using on your desk.

The RP5G2s feature a 5-inch glass aramid composite woofer and 1-inch neodymium soft dome tweeter with ferro fluid. In layman's terms, they are not your typical consumer-aimed speakers. The whole point is that they're made for music enthusiasts. Each studio monitor has a 75 watt amplifier built-in, XLR, TRS and RCA inputs, as well as a front-firing bass port. 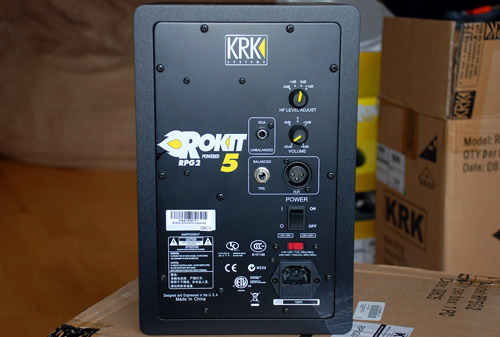 At 10-inches deep, 7-inches wide and 11-inches tall, these studio monitors are an entirely different beast compared to the small satellite speakers found with surround sound systems and other such computer speakers.

Why you should consider an external audio interface

While it is perfectly possible to hook up these studio monitors directly to any audio source, such as my MacBook Air, it won't result in the clearest sound. If I just connect the RP5G2s to my laptop with a 1/4-inch TRS (with separate mono left and right male connectors) to stereo mini-jack cable, the resulting sound will have more noise and interference than it would with an external audio interface (consider it an external sound card) designed to cut out the noise and reduce latency. Having nice studio monitors and not using an external audio interface is like putting regular octane gasoline in your high-compression engine German sports car. It'll work, but you won't be getting all the performance you paid for.

There is also the potential for distortion if one's not always careful to keep the output to a low level on the computer. That can happen when connecting amplified studio monitors to an amplified headphones output on a computer.

If your computer already has a dedicated sound card like any of the Creative X-Fi offerings, you should be fine. There are a lot of competitors in the external audio interface market, ranging from M-Audio offerings to the seductively-styled Apogee Duet. My needs were that the interface used USB as my Air doesn't have FireWire, and that it has TRS outputs for each monitor. I ended up going with the 150 PreSonus Audiobox USB.

Fortunately for OS X users, the Audiobox does not require any drivers as it is compatible with Core Audio. Also, you will not be able to control the volume from the OS anymore. This is normal. The Audiobox processes the signal on its own and lets you adjust volume with one of its knobs. Likewise, each Rokit RP5G2 has its own volume knob.

Putting it all together

There is one notable downside that comes with this audiophile territory; there are lots of cables. To be exact, each studio monitor requires its own power cable and there are 2 1/4-inch TRS cables coming from the Audiobox with one going to each monitor. In addition the Audiobox also has a USB connection. 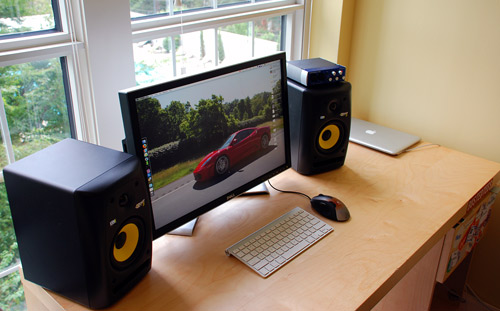 At an aggregate cost of roughly 450 not including shipping, you'd expect this audio setup to be a monumental upgrade from your typical pair of so-called computer speakers. You'be be 100% on the money. This setup sounds amazing compared to anything I've owned.

At 75 Watts for each studio monitor, some might scoff and think that their 505 Watt 5.1 gaming speakers trump this setup in every way. With their small drivers, traditional computer speakers and surround sound speakers just can't compare. Each RP5G2 produces more decibels than such computer speakers can, and more importantly the Rokit's make crystal clear sound. You can hear every guitar strum, every vocalist and every drum hit - just like it was recorded. There's no overpronunciation of bass to drown out the rest of the audio.

I know you won't be able to hear the audio quality but here's a video anyway.

The RP5G2s start coming to life at 1/5 volume and keep going. I have yet to put them past 1/2 volume and I don't think I'll ever need to, unless I'm in another room. One thing I like about the Rokits, that others might not like is the frequency response range: 53Hz to 20kHz. The key point being that it doesn't capture all of the bass; deep bass found in certain songs is around the 20Hz area. I like this because I don't want my desk shaking too much, or the walls - I've got neighbors. Fortunately, if you're a bass fiend, KRK makes a massive 10-inch subwoofer that can easily be added on to any system.

If I had to point out one aspect of the monitors that really capture my attention, it would be the tweeters. They create the high-end treble that I associate with a crisp sound.

With a more professional audio setup, it's easier to tell the difference between an MP3 encoded at 128kbps and a track encoded in lossless FLAC or in a near lossless MP3 at 320kbps. However, that is actually almost negligible compared to the difference in audio quality without using the PreSonus Audiobox. I hooked up the Rokit's directly to my MacBook Air and proceeded to play some Weezer tracks encoded with FLAC.

Without the external audio interface, there was the a slight, yet definitely still noticeable "haziness" to the sound, as if something was blocking it. In other words, there was the addition of noise. A similar noise presence was found when playing a track on my iPod Nano (2nd Gen) compared to playing the same track on my computer through the Audiobox. The addition of the Audiobox as an external audio interface to this setup was well worth it.

I'm very happy with my investment although I'm thinking the Rokits might be better suited for being hooked up to a Sonos ZonePlayer or Logitech Squeezebox and placed in my living room. Also, one slight annoyance with this setup is that now I must manually turn off each studio monitor and the power switch is on the back as opposed to on some easily accessible controller.

How much of an audiophile are you? What speakers are hooked up to your computer now?