Ah, the joy of an impulse buy with a high interest rate credit card. I wasn't really interested in the MacBook Air until I started reading about it more and more last week. Then I realized I lug my MacBook Pro around everywhere and I naturally just had to get the MacBook Air. The title is a bit misleading but it draws upon the minimum monthly payment on my credit card: 15. Of course I won't be paying 15 per month forever, but it makes for a nice title.

By the way, this makes me a hypocrite for the second time. I said I wasn't going to get an iPhone, and then I did. Same thing happened in January when I said the MacBook Air wasn't for me. Oh, look what we have here... 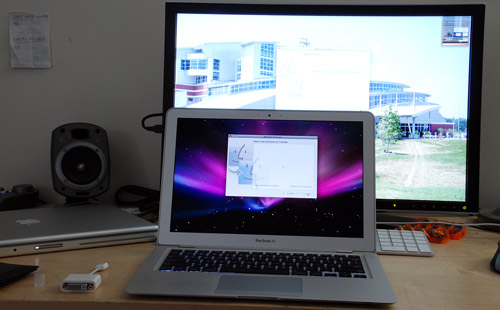 I chose the lower MacBook Air model: 1.6GHz Core 2 Duo with 80GB hard drive. I did a lot of research about which to buy and while I was financially limited, I knew the SSD offered by Apple is slow compared to other SSDs and is overpriced. The 1.8-inch SSD offered by Apple as a 999 option has paltry read rates (~50MB/sec) compared to other SSDs currently out that can consistently put out read rates over 100MB/sec. As for 1.6GHz versus 1.8GHz, the upgrade is about a 15% price hike for a 15% increase in clock cycles. It's not that noticeable and when a better MacBook Air comes out down the line, you'll be glad you didn't pay the higher price for an outdated machine. The last thing I did before heading to the Apple store was ask Ryan if the Air can play HD content. He told me it can for the most part, albeit 1080p video stutters/drops frames at times. That's fine by me, I won't be playing full-HD video too often.

MacBook Air along with a notebook in my messenger bag.

I took some notes and made a list of the first things I did with the MacBook Air. I chose not to use the migration assistant as I felt I would be better off with a clean install instead of bringing over all the junk from my MacBook Pro. That and the Apple store was out of the coveted 29 etherdongles, so there was no way I was going to spend a year transferring everything over Wi-Fi.

The MacBook Air is now my primary and only machine. I migrated all my data over from the MacBook Pro and will be in the process of selling it after I take it in for some repairs. I've only had the Air for 24 hours so I'll write a post after this detailing my experiences with the Air as my primary computer. So far it's great and the slower speed hasn't affected any of the things I do. It just tends to have the fan bumped up more often than not, such as when running my 24-inch display.

Thoughts? To Air or not?