A year ago I wrote about how I wanted to build a Hackintosh. Oddly enough, exactly a year later, I ended up getting around to it. 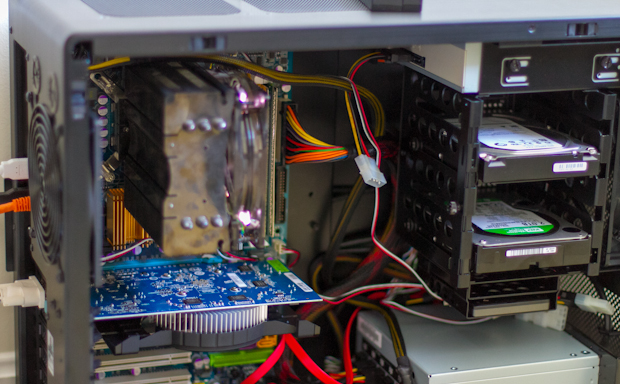 My roommate/cofounder Akshay had a Gigabyte GA-EP35-DS3R motherboard and Core 2 Quad CPU lying around from his last hackintosh (he's since upgrade to Sandy Bridge). I ended up putting getting a display, graphics card, case, SSD and PSU to put it to use. I plan on upgrading to the new Ivy Bridge chipset and 22nm CPU but will wait until Apple releases an Ivy Bridge computer so that no patched kernel hacks are necessary to get it working as is currently the case.

So far I'm very happy with my current setup. Even though it's an old LGA775 setup it feels way faster than my Core i7 1.8GHz MacBook Air. The Hackintosh has a 2.4GHz Core 2 Quad that I overclocked a bit to 3GHz.

I'm the most pleased with the Lian Li case. It's their smallest ATX offering and comes with lots of rubber standoffs to ensure quiet operation. The doors don't need any screws and they just snap on and off. The most interesting part is that the PSU is located in the front of the computer, so as to reduce the height of the case. It reminds me of when people were talking about the BTX form factor back in ~2004 and all the BTX cases relocated power to the bottom.

I'll go into more depth about how the whole Hackintosh installation process works when I upgrade this box to Ivy Bridge later in the summer, but here's the gist: