Many of you have been wondering when or if I was going to impart my thoughts about the recent Apple announcements. To get that out of the way, all I have to say is that iPhone 2.0 is what the first iPhone should have been, and exchange support will be huge for waning enterprise customers off their BlackBerries. Instead of writing about Apple's WWDC, I have been putting together a home theater system of sorts to finalize my new apartment. 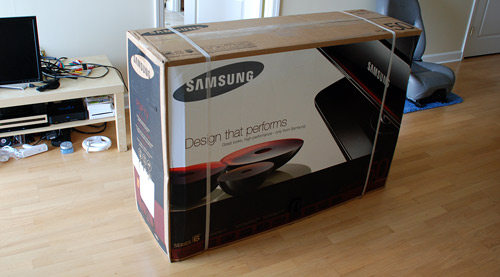 After much deliberation, I ended up going with a plasma display instead of an LCD display. I went with a 1080p capable 50-inch Samsung (PN50A650) "Touch of Red" series plasma HDTV to be specific. While plasmas are generally knocked on for short lifetimes and notorious burn-in problems, they excel at vivid colors, blacker blacks, great viewing angles and outstanding contrast: all things LCDs are generally not known for. Recent plasma displays have very long lifetimes (~60k hours to turn half brightness) but users still need to be careful about potential burn-in issues. However, if you are careful with the plasma and avoid displaying static images for the first 100 hours, it becomes much harder to actually trigger any image retention issues.

After unboxing the TV along with the help of a friend, I quickly realized 50 inches is a lot larger than I had envisioned and that my cheap Ikea coffee table might not be up to the challenge. At the moment I have a Wii, Vudu and DirecTV HD receiver hooked up to the TV with plenty of extra HDMI and component inputs left to spare. I had initially planned on setting up a TiVo HD for my DVR needs.

Then I found out that I would need a CableCARD to get it working with cable service. That means I could either go with Comcast's more expensive service or go with a considerably cheaper DirecTV offering in the building, at the expensive of not being able to use the TiVo HD. DirecTV doesn't offer the CableCARDs the TiVo needs to decode the channels because DirecTV is simply not a cable company and not required by the FCC to provide such cards. Depending on how pleased I am with DirecTV, I might switch to Comcast down the line.

The first order of business with the new setup was watching a movie to test it out. While I don't yet have anything that can provide full HD (MacBook Air doesn't like playing 1080p.. or 720p), with the exception of the HD receiver, I ended up watching one of the Vudu box's HD offerings. Of course, HD on the Vudu box only means 480p. During the movie I quickly noticed that the built-in speakers just don't cut it. They are placed on the back, sound rather muffled and lack clarity. It makes it hard to hear movie conversation - so much so that Chris made me pause the movie and plug-in my Logitech Z-2200 2.1 speaker set.

Other than the sound issues, the contrast and video clarity was great. I don't have much to compare the Samsung plasma to, except for a few computer LCD displays, but it passed my test. More on this in a future post.

The only HD I have experienced with the display was with OTA HD channels. I have the input line spliced with one line going to the receiver and another to the TV since there is an HDTV antenna on the roof connected to that line. Flipping through an Atlanta Braves baseball game gave me the first "wow that looks good" feeling. Hopefully, there's more of that to come. I plan to chronicle any issues I run into with this HDTV setup in this series of posts. In the meantime, I need to see if I can get Discovery Channel HD and watch their new When We Left Earth series.

Thoughts? Is your TV ready for the US Digital TV conversion set to take place in February?