Fuzzwich is the product of Habit Industries, an early-stage startup backed by Paul Graham's YCombinator that aims to develop "tools supporting the creation and distribution of animated videos". Fuzzwich Mini-vids are small and fun animated videos users can create themselves in an interactive interface with a growing archive of objects including music, actors and backgrounds. 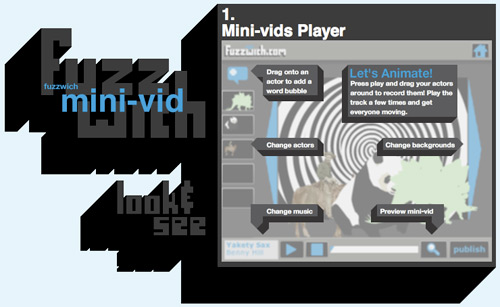 So what's the point of all this you say? Pure boredom-killing fun; the same reason that made YTMND so popular. However, while YTMND projects are mostly gags/crude humor, Fuzzwich Mini-vids can hold deeper values. Okay I admit that sounds cheesy, but I'm trying to say that you can make an animated video that communicates your thoughts through a creative medium. Take for example, this mini-vid that a Fuzzwich developer made to tell his parents what his startup had been working on for so long.

Making a mini-vid is a rather trivial process: select background music from a good variety of choices, choose a few actors, play the song and move the actors around as it plays to record their movement, then add some speech bubbles if you'd like and publish. 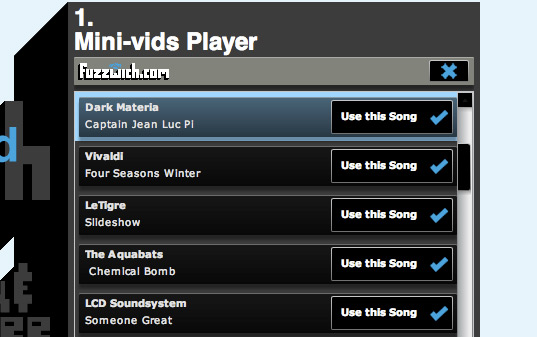 Once a mini-vid is published, you can grab the embed code and put it on your site or blog as I have done below. For me, the cool thing is that it's not just a player, you can actually build a mini-vid from within the widget by clicking the home icon on the bottom right of the widget.

What are your thoughts regarding Fuzzwich mini-vids? The site has only been up for a few days and their product is in the very early stages of development, so feedback is vital for the team.

Disclosure: Rob Fitzpatrick works at Habit Industries/Fuzzwich and is a recent Georgia Tech graduate, one of the first one to graduate with GT's new Computational Media degree (which I am currently working towards). Rob proved instrumental in helping me learn C for programming on the Gameboy Advance in a Georgia Tech CS class we were in a few years ago. Thanks Rob!