It has been quite a while since my last update on what I actually do for a living - work on the startup Skribit. Okay, well to be technically correct this blog is more of a living as it pays more (thanks for reading!), but I work about 60 hours a week on Skribit, more or less. Some weeks we're gearing up for a deploy (like this past week) and I work a lot more to clean things up in time. For those wondering what Skribit is or what I've talked about thus far as I attempt to chronicle my startup journey, here are most of my past articles:

and other such related posts:

My last Skribit update dealt with scaling and at the time we had incessant server issues, sprouting from our move from the nginx web server to Phusion Passenger/Apache. Everything has since been ironed out and we haven't had to deal with many server configuration related issues. Props to Media Temple for the excellent support with our unique 2-server setup (Disclosure: Media Temple hosts every website I've ever touched in the last 4 years).

More or less, everything we have been doing in the last few months has been adding features and improving the service, as to be expected. We have still laid low on the marketing side of things, with no formal marketing pushes and everything thus far being related to word of mouth and me jabbering about Skribit here. We won't be doing too much active marketing until we believe we have a solid and effective offering. The last thing I want is for someone to try out Skribit, leave and never give us another shot later on based entirely on their first impressions of our then not-built-up offerings. Granted, this can be a bad tactic if you never think you're good enough, but I believe it's in our best interest at the moment. 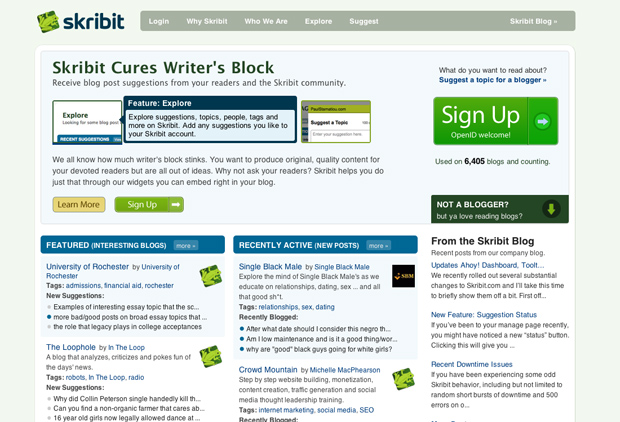 Some of the small features we've unleashed in the recent past include suggestion status, tooltips throughout the site that make it easier to browse around, as well as various beautification efforts and the ability to follow users. Lots more about that can be found on the Skribit blog.

Getting Sick... Then Finding Health Insurance

And then June came along and I started feeling sluggish, had a stiff neck, relentless headaches and fever. Days later and I still had the same symptoms. I went to the hospital, where 3.5 hours and 2,800 later I found out I came down with the relatively common mono virus. I was sleeping some 18-20 hours per day for weeks and did not get any Skribit work done for a month, which definitely pushed a few milestones back.

Before I graduated from Georgia Tech, I bought a 1 year health insurance policy through the school so that fortunately should be taking care of the expenses and follow up doctors visits. Through this whole ordeal I learned how important it is to have good health insurance. I was not entirely pleased with how my health insurance performed. It limited which doctors I could see, which in my opinion left some of the better doctors out of the equation. That policy expired this month and I began searching for a new policy in July. There are a lot of options out there and even though there are great sites like eHealthInsurance.com to help filter through all the plans, I was still clueless when it came to different terms like PPO, HMO, HSA and the like.

My father, a practicing doctor for over 40 years, helped me a ton when deciding and told me which providers to avoid based on his experience with dealing with various providers. I also enlisted the invaluable help of Angus McRae, an Atlanta-based insurance broker that works closely with many startups and small companies and has sponsored just about every tech event in Atlanta in recent years. I ended up going with a moderately high-end/good coverage plan from UnitedHealthOne for around 140 per month that has a relatively low 1,000 deductible at the expense of a 20% after deductible coinsurance.

Then I broke my toe with a run-in with an aggressive couch. </klutz>

This section suggested by Daniel Sims via Skribit

In the last month Skribit has been fortunate enough to get some extra help from an intern. Alex Coomans reached out to us a few times on Twitter, asking if he could work with us. After a brief email conversation, I thought he would be a great fit and brought him on-board. He's a 17 year old high school student and remarkably skilled programmer. This is the first time we've had an outsider come into Skribit and get dirty with our code and how we ran things. I was pleasantly surprised that it didn't take but a day or two for Alex to get a hang of our code. I guess that means we have been keeping our codebase somewhat clean and up to standards.

Alex's first mission was to construct a way to receive suggestions that aren't tied to a blog — "unclaimed" suggestions as we call them. The logic behind this is that someone can come to Skribit with the thought that they want to learn more about topic X and don't care who writes about it. They submit an unclaimed suggestion, which then gets listed around Skribit, for anyone to claim and work on with their own blog. The person that submitted that suggestion can then follow updates of the claimed suggestions and get notified of any blog posts that emerge from it. You can see this feature live on Skribit now. 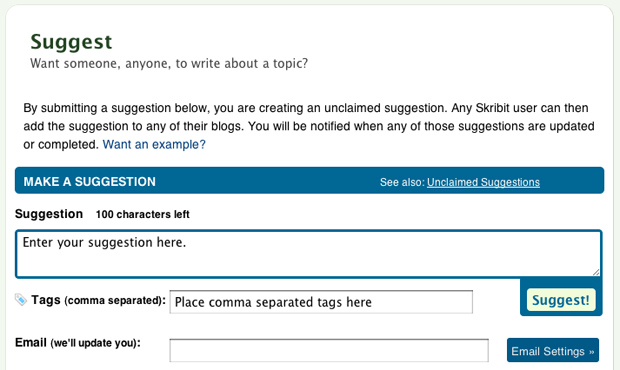 Alex has also been helping out with getting follower support on Skribit and we're beginning to integrate that with an upcoming activity stream feature. Overall I'm very glad to have Alex in our ranks, and I'll be happy to write him a glowing letter of recommendation to Stanford and whatever colleges he ends up applying to.

Hat tip to Michael Ivey (Founder of Twitpay) who originally gave us the idea for this particular Skribit feature.

Lately we have been noticing more and more spam and malicious/stupid suggestions coming into Skribit. In particular Colin Devroe, whom I've known since my first days of blogging, pointed me to a large number of explicit suggestions on his Skribit account, created by two IPs in his vicinity. While we already have a few precautions in place, such as the ability to report spammy blogs and the ability for Pro account users to moderate suggestions, it was obvious we needed to give the blogger more control over such situations and do things automatically on our end.

When dealing with user-submitted content, you can never be too safe.

As a result we fast-tracked a few related features, with our most recent deploy filtering out suggestions with "unsafe" words, as well as an upcoming feature to ban users/IPs. Both features craftfully coded by Calvin.

Prior to that we had a similar issue with our Groups feature. We axed that feature from a mixture of spam and low user adoption. We're going to go back to the drawing board on that idea and relaunch something called Topics in a couple of months.

In general though, having to deal with spam is a good problem to have. It means you're growing and on the right track.

I've been at home in Texas for the past month and will be for the next few weeks, at the request of the parentals. Unfortunately my Herman Miller chair is back in Atlanta. I didn't think much of it, but just a few weeks into working at home and my back has started becoming a nuissance — all because of the regular chair I have been using here. Just something to think if you work on the computer for 10+ hours a day. This makes me wonder what an upgrade to the Embody would do.

Being at home this long with just my tiny laptop screen, there was no way I was going to be as productive. I made a b-line for the nearest Best Buy and picked up a cheap external LCD. That happened to be the 269 Samsung SyncMaster P2370, a sleek 23-inch 1920x1080 (I would have preferred 1920x1200 though) LCD display. Overall it has been a worthy companion given the situation, except that I've noticed some color reproduction issues. Namely it is hard to see light colors unless you're viewing from extreme angles, which makes Photoshop work rather interesting. While the screen itself is matte, the bezel isn't and reflects some of the screen inside. The base is rather wobbly too and it doesn't have any fancy adjustments other than pivoting. 6 out of 10 Stammys. 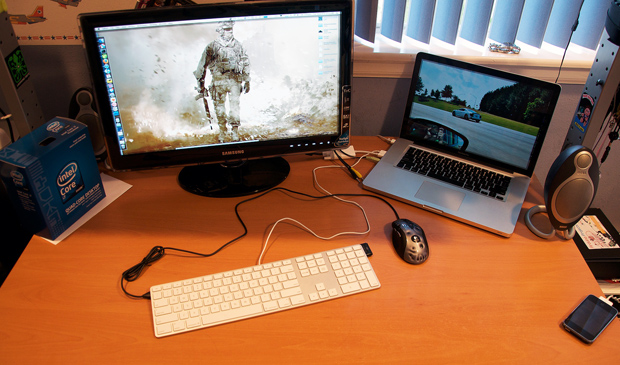 The Core i7 processor in the corner of this photo is for an upcoming PC build... stay tuned.

The original plan, before I got sick, was to have enough solid features by the end of the summer to begin employing a marketing campaign, talk with some larger bloggers to try out Skribit, et cetera. That has been pushed back a bit, but we're steadily making progress. Calvin recently rewrote our payment system (from Amazon FPS to the new Amazon Simple Pay) and we have made Pro paid accounts more prominent on the site. All user registrations go through a plans page which shows users what the Pro account can do, for 24.95 per year (we had been doing 5/month).

How's your startup going? If you're not working on a startup, what's your current gig? What are your thoughts on startups (in this economy)?

I'll leave you with this famous clip (remix):