Flock is the latest open source browser, catering especially to bloggers and Web 2.0 savvy users. It is heavily based upon open source code from Mozilla's Firefox browser and was developed by a group of a 10 guys and a gal in a garage in Palo Alto, California (with lots of contributions from many developers). Flock promises to leave the user with a strong social web browsing experience. With bookmark syncing with del.icio.us, integrated blogging and flickr support, Flock looks like a real treat. But be warned, in this early developer preview there are some nasty bugs and lacking features that should be a must if Flock hopes to lure current Firefox users. If you have never heard of Flock before, I would recommend catching up with a few articles: Wired, Business Week, and Solution Watch. 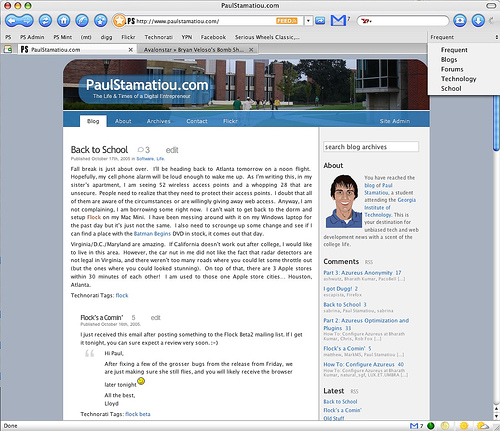 Flock is not the browser that just anyone can pick up and use. Unlike Firefox, there is a slightly sharper learning curve. The way regular bookmarks are managed has changed, making it remarkably different from IE and Firefox, but seemingly closer to the way Safari handles bookmarks. Oh and I should mention, they are now called favorites not bookmarks. Apparently the bookmark has lost its cool factor now. Flock is not yet compatible with every extension and theme made for Firefox, therefore much of the functionality that Firefox users gain from extensions will be lost in Flock.

I would not suggest using Flock as your primary browser just yet. Not only is it still in the early stages of development, it is based upon the beta code for Firefox 1.5, which hasn't exactly been proven to be the kindest to me. Flock has flocked up a few times, lost my data, and forgotten my settings. That being said, don't say I didn't warn you.

Great Theme
As Brian Benzinger said, "[Flock] basically looks like a beautified Firefox, but with extra features." The Flock crew created a custom theme that suits Flock well. Upon opening Flock for the first time, you will see some new buttons on the navigation toolbar. Of particular interest are the button with a writing quill icon and the button with three stars on it.

Integrated Blogging
The aforementioned quill icon opens up the new blog editor. You'll quickly see how it is neatly designed and doesn't require a usability expert to find out how to go about using it. The first time you open it, you will be asked to provide the url of your blog. Through that, Flock will go online and determine what type of blog you have. It was able to setup my WordPress powered blog just fine. However, I have heard that it does not currently work with Movable Type 3.2 blogs. The blog editor has all the normal features, a few quicktags, and can even lets you add Technorati tags to your post. It also features a WYSIWYG editor area as well as a code view. A button on the right of this blog editor lets you open up a blog topbar. In this topbar Flock gathers your latest blog entries and has a box where you can drag stuff that you are going to blog. While you can save your post as a draft, it will not save it online as a draft; only locally. That disappointed me, but it's not a feature that can't be added later on. I also noticed that while Flock can pull the latest posts from your blog so you can edit them, it does not detect any drafts you have saved online. Another downside is the lack of categories. You are unable to tell Flock where to put the post, so your blog will automatically post it in the default category, which is uncategorized for many people. 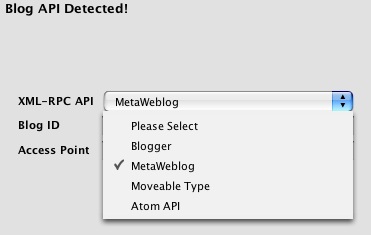 Favorites Manager
This is where Flock really takes off. Activated by the three-starred icon on the navigation toolbar, the favorites manager is easily the most robust new feature. It manages your favorites, whether it be in a collection or not, your history, and lets you sort favorites by tags that you give each one. The tags feature looks like it might have some use for large favorites libraries, but taking the time to type in tags for each favorite is asking a bit too much. However, collections is where all the magic happens. Essentially, you can have several favorites toolbars and select between them with a handy drop down menu which appears on the top right of the browser window. This is by far the best addition in my opinion. I used to have way too many bookmarks in my Firefox bookmarks toolbar and would end up changing the name of each bookmark to a letter or two so I could cram as many bookmarks as I could on the toolbar. I have noticed a small bug that when editing the properties of a favorite in a collection and saving it, Flock takes you back to your favorites library. That gets annoying when you are trying to edit several favorites in one collection. You will also notice a large star directly to the left of the address bar. Click this once and the current page is starred, or added to your favorites library. Clicking on the small arrow in the icon brings up a menu throwing a slew of options at you, from adding a tag to the favorite or adding it to a collection. Additionally, if you have a del.icio.us account enabled, all of your starred pages are automatically synced up to your account. 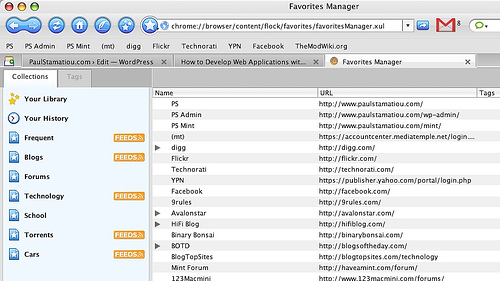 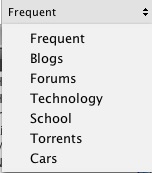 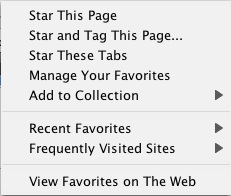 Del.icio.us Integration
To really emphasize the social web browsing soul of Flock, support for the wildly popular social bookmarking service, del.icio.us, has been included. There's not much to say about this great new feature. It just works. Give Flock your login info, and if you give it the authorization to, your favorites will be added to your del.icio.us account. 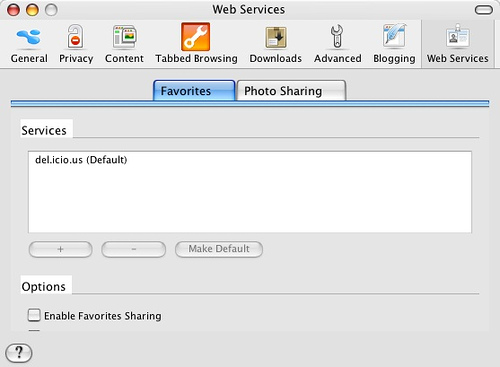 Flickr Integration
Similar to the blog topbar, a Flickr topbar has been created. It allows you to enter in any Flickr username and view that person's photostream. Dragging a photo to the browser window fires you over to that Flickr page. Dragging a photo to the blog editor adds it into your blog entry. It is a nifty feature, but is rather limited. I would like to see some Flickr uploading enabled into feature, as right now it is not much more than a glorified Flickr RSS reader. 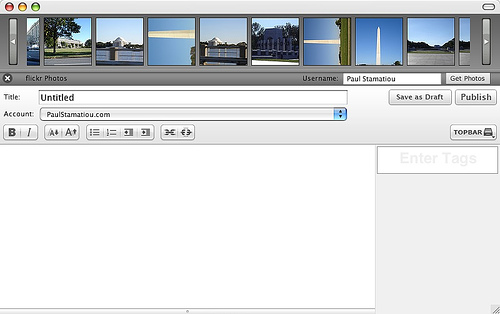 Inline Feed Viewer
Flock is able to detect and read feeds in a way close to how Safari does it. If you are on a page that has a feed, an orange feed icon will appear to the right of the URL. Clicking that icon takes you to its rendering of the feed. This so-called Agg, short for aggregation, view is simple and easy to use, with a good text size. It even lets expand and collapse feed entries. You will see this feed detection all throughout Flock, especially in the Favorites Manager where an expansion icon appears next to favorites that have one or more feeds.

Shelf
Going hand in hand with the blogging aspect of Flock, the Shelf is an original and unique feature from the Flock team. Throughout your browsing experience you can hold on to important images, links, or portions of text by dragging it to the shelf. You can retrieve them again later whenever you please and they stay put after restarting Flock. The shelf can be described as a clipboard on steroids. 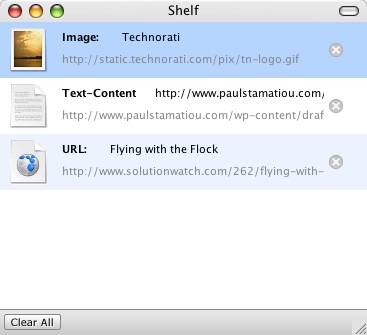 Search Engines
The standard Firefox search engine add-on in the navigation bar has been tweaked, now allowing you to search Technorati and Wikipedia. You can also search your history via the search field. The whole interface reminds me of Spotlight in OS X.

I have been following Flock for a long time now. I've been reading the developers' blogs closely scanning for hints of possibly new, upcoming features and release dates. Now that the day has come, I have been blown away. While I have brought up several cases where I was disappointed with some of functionality from the new features, that does not change the fact that I love Flock. My only problem is trying to explain what Flock is to a Firefox user in one sentence... my usual response is its better or just download it. But now I have come to see its much more than that. It is a powerful web browsing and now publishing utility. And having it open source seals the deal, ensuring many Flock compatible extensions in the near future. When Flock hits a more stable release, I would love to see the ability to open a favorite in the favorite bar in a new tab. Usually, I middle-click them to open them in new tabs, but in Flock they are unresponsive and you can't even right click them to change the properties, forcing you to open up the Favorites Manager to get the job done. Also, I am not sure who made the Flock logo, likely Jon Hicks, but it is stunning. I did not think it could get any better than the Firefox logo, again I was caught off guard. One last thing, Flock can't import your bookmarks and saved passwords/forms from Firefox, yet.

What Are You Waiting For?