In response to news that Apple will be revamping the iMac lineup in the next few months, I sold my 24-inch iMac to take advantage of its current higher resale value. Today I purchased a 15.4-inch MacBook Pro to go in its place. This revision of the MacBook Pro has some notable updates from its previous brethren. 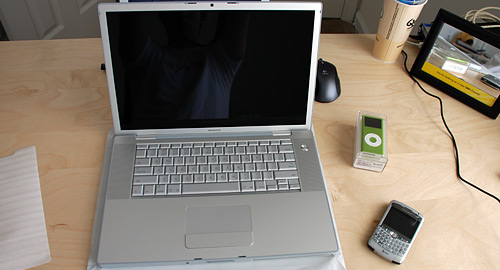 As you can tell from my reflection, I chose the glossy display. The iPod nano was free after rebate as part of a college student deal.

Why I Bought It

Particularly, I picked up the lower-end 2.2GHz model with a glossy display, with my student discount. My logic was that the extra price for another 200MHz, a slightly larger hard drive and an extra 128MB of video card RAM was negligible for the types of things I use my computer for - Photoshop, coding and lots of web browsing. The MacBook Pros currently come with 2GB of RAM as standard and can be upgraded to 4GB, which is great news for people that use Parallels often. If you're looking at purchasing a MacBook Pro my advice is get the slower CPU and install loads of RAM yourself (Apple's charging over 600 to upgrade to 4GB when you can get the same RAM online for under 200).

First off, this MacBook Pro is the first Mac to have a LED-backlit LCD display. That means crisp, vibrant whites as Engadget previously noted. Compared to my iMac there was a definite difference for certain things though. For example, on my flickrSLiDR the blues looked different with the fourth blue used (#E3F2F9) looking like light purple/lilac. Combined with a glossy display, blacks are darker and colors are more vivid. It's a great combination and excels when it comes to viewing media. Overall, I think the new LED-backlight is a welcomed update.

I quickly noticed the differences between brightness settings. At the highest setting, the brightness is great and not overly bright to wash out colors but as you decrease the brightness, it gets considerably darker than its CCFL-backlit counterparts. I actually see this as a good thing. How many times have you been computing in complete darkness and wished you could have had the display darker than possible? I've been in that situation several times when watching movies in front of the TV, laptop in hand. (Usually I would resort to brightness control which does things in software, not hardware, to "control" the display's brightness.)

This picture doesn't do the MacBook Pro's display any justice. You need to see it in person.

Moving on, the new MacBook Pros utilize Intel's Santa Rosa platform. In a nutshell, you get better battery life as it uses dynamic front side bus switching to essentially throttle the FSB when there is low CPU utilization. Combined with the LED-backlight you can expect to see a battery life increase of 30 minutes to 1 hour per charge cycle compared to the last revision of 15.4-inch MacBook Pros. In my limited testing, that left me with about 3 hours of battery life with the backlight on the highest setting while web browsing. That number can be stretched to around 4 hours by decreasing the backlight's brightness and enabling OS X's "Better Energy Savings" mode.

One issue that has recently been going around online regards Apple applying too much thermal paste to the CPU, GPU and chipset chips which causes the system temperature to be abnormally high. Some people have reported CPU temperatures reaching as high as 84 degrees Celsius. After benchmarking my MacBook Pro many times with XBench and making Flickr Uploadr resize 1,000 10 megapixel images, I was able to kick up the CPU's temperature to 72 degrees Celsius at maximum with its idle/web browsing temperature around 56 degrees Celsius. Externally, the highest temperature I was able to record was around 52 degrees Celsius on the bottom, which is high enough to be uncomfortable on your lap for extended periods of use. So yeah, this thing does get hot. Throughout my benchmarking it remained fairly quiet. Although, I would have preferred that it got louder and cooled itself down sufficiently.

Checking the MBP's temperature at the hinge vent with an Infrared thermometer.

The updated Santa Rosa-bearing MacBook Pros are excellent machines, especially the LED-backlit 15.4-inch models (the 17-inch MBP does not yet have a LED backlight). In my eyes this thing is flawless. While it is slightly too big, in my opinion, to lug around to class everyday (that's why I've got the regular MacBook as well), I think it will make a great desktop replacement system. Next up, a Dell 30-inch display to attach to the MacBook Pro, hopefully. 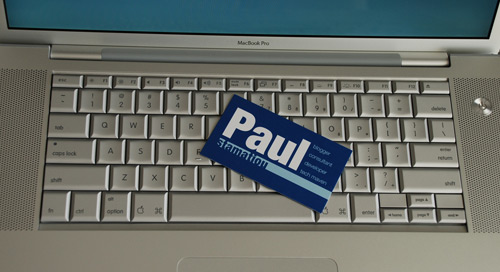