For the past three weeks I have been toting around a Nikon D300 camera, courtesy of John Ratcliffe-Lee and his team at the MWW Group. While my Nikon D80 is considered an entry-level DSLR camera, the D300 is more along the lines of a mid-range offering, only bested by the full-frame Nikon D700 and the D3. That privilege doesn't come cheap though; the current D300 kit I have, including an 18-200mm lens with image stabilization and an extended battery, runs close to a hefty 3,000 USD. I titled this post first impressions instead of review since there are way too many D300 features to cover for me to even come close to calling this a review. 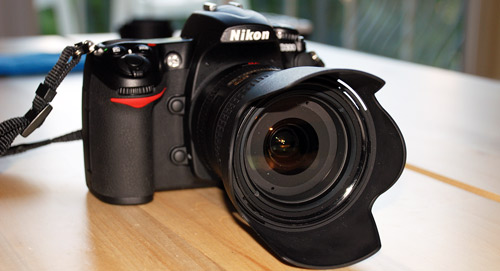 The D300 sports a self-cleaning sensor unit containing a 12.3 megapixel DX format (not full-frame) CMOS sensor, powerful Nikon "EXPEED" image processor and a high-resolution (noticeably much better than the D80) 3-inch display. However, I'm more interested in the D300's amazing 51-point autofocus system and its "Active D-Lighting" feature. Everything about the D300 is quick, especially coming from a D80. It's also quite a bit larger and heavier, quickly setting it apart from entry-level DSLR cameras. 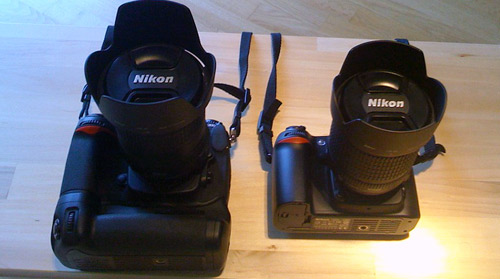 Unlike previous Nikon DSLR offerings, the D300 has a "LiveView" feature, making it much like a point and shoot camera. However, using LiveView is quite different than a point and shoot camera. Since DSLRs have a single lens, using LiveView involves lifting a mirror inside the camera. When the picture is taken, the mirror goes back down and the screen stops showing the image until after it has been saved. It is honestly quite a bulky process and I do not think many camera aficionados will be using it often. 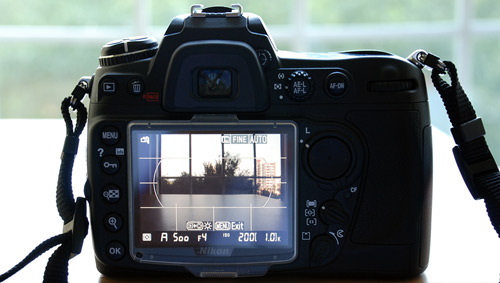 It does have the ability to let photographers digitally zoom in on the image, like an enhanced viewfinder, as it is being composed and then take the picture.

As a casual photographer I don't spend too much time tinkering with settings. Rather, I prefer to use smart features of the camera to capture a great picture. With the D300 those features are "Active D-Lighting" (commonly referred to as Adaptive Dynamic Range) and Vibration Reduction built into the 18-200mm lens. First off, ADR is a real-time image processing system unlike regular D-Lighting, which is a post-processing feature to adjust highlights, colors, shadows and contrast. With ADR enabled, the D300 prevents images getting washed out from overexposure and it works pretty well; much better than taking a photo without it and then trying to correct the picture with D-Lighting.

Combine Active D-Lighting with the D300's better color saturation and it's a great camera for the gadget-crazed. On the subject of color saturation, with "Picture Control" set to Vivid and then Sharpening, Hue and Saturation dialed up a few notches, you can breathe new life into pictures and it saves the hassle of increasing saturation in Photoshop for a livelier picture. 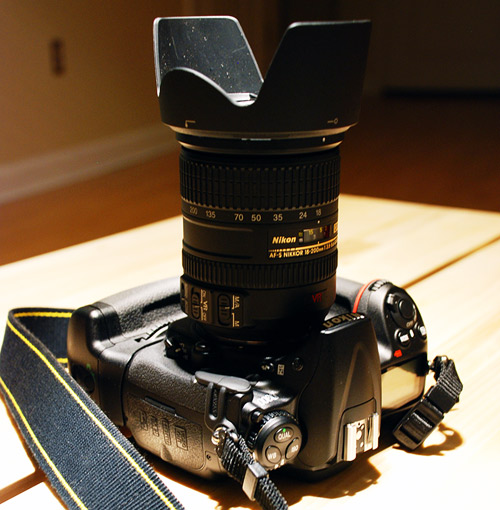 Vibration Reduction is actually a feature provided by a mechanism in the lens which moves the internal optics to account for random camera shaking and lens movement, making it ideal for hand-held photography. The effects are particularly noticeable in low light situations. While I think the effects of VR are at least noticeable, I have heard photographers say they can shoot almost entirely without a tripod thanks to their VR lenses. I'd at least want to have a monopod handy for some stability.

The 51-point autofocus system on the D300 is the next most useful aspect of the camera. Compare this to the 11-point autofocus system on the D80. The benefit of having so many extra autofocus points is that you don't have to worry about how your photo is composed - the D300 will just select the most appropriate of all the points and focus there. It makes the photo composition and capturing process much quicker. I remember when I was at the Detroit Auto Show in January with a Nikon D40x that only had 3 autofocus points. I constantly had to recompose the photo to ensure proper focus, or manually focus and pray for a sharp image.

There is a slight downside when using the AF mode commonly referred to as "big white rectangle" (named after the icon on the AF mode selector). It takes a bit longer for the D300 to autofocus in this mode as I'm guessing the processor can't go through all of the data produced by the 51 points fast enough to select the right ones. But I'm talking only barely noticeable.

As for battery life, I took the Nikon D300 with me to Rome for a week with the extended battery grip and only consumed one of the batteries and ran through 700 shots. I never even had to use my charger.

On the subject of nitpicks, Nikon claims that the D300 has much better noise reduction in images yet low-lighting pictures I have taken were still considerably grainy. Of course, the camera settings and the lens used are both factors in picture quality.

The D300 is a high-performance prosumer camera and seems to be as good as you can get before the jump to a full-frame sensor. It focuses quickly, shoots quickly and can adjust "D-Lighting" on the fly well. However for that much money, I think it is worth it to invest in a quality set of lenses, such as those featuring VR, and get a cheaper body (keep your eye on the upcoming D90). That way you'll be able to afford replacing the obsolete body every 3 years. That's not to say that the D300 isn't a great camera though. If you want to read a real D300 review from a real photographer, check out Phil Askey's review or Ken Rockwell's review.

How would you spend 3,000 on camera equipment?

Disclosure: This is not my camera. It is on loan from Nikon and the MWW Group.