If you've graced the pages of my flickr account lately, you will have seen two shiny new MacBooks. Yes, two. Chris, my housemate this year, opted for a black MacBook and got me to upload his pics as his non-pro flickr account went over the bandwidth allotment for the month. Meanwhile in Houston, I picked up a white MacBook just an hour later. Our system specs are essentially the same - 2GHz Core Duo, SuperDrive and 512MB RAM (which we will upgrade to 2GB soon). We both took up Apple on the back to school deal where we get 2GB iPod Nanos free after rebate. You can hear what Chris has to say about his MacBook and putting Boot Camp on it in his article. As for me, I won't be letting any Microsoft products touch this hard drive.

There are two major improvements to the MacBook that some people don't care for - the glossy screen and the irregular keyboard. I actually find these both to be advantages. The glossy screen is well made, providing a bright and vivid picture that can be used in just about any condition. Even when working with it in sunlight it wasn't more than a slight annoyance. At my desk with the room lights on, there is no glare. That's all that really matters, no glare where I use the computer the most.

The keyboard, as you've seen, features identically shaped keys. There is no curve to them; they're flat. However, this provides for some satisfying tactile feedback and seems like I can actually type faster. You don't have to push they keys much for them to respond, which might throw people off that are used to regular desktop keyboards.

The main aesthetic feature of the white MacBook is a glossy, non-matte (the black version is matte) exterior. This is one of the main reasons I chose a white MacBook. The other reasons being black was more expensive for the same system specifications, I didn't want to cramp my roommate's style (we can't have the same thing), and white is correlated with a Mac whereas black isn't (IE, it looks more like a Mac... I don't want it to look anything like a PC).

The battery life on this thing is phenomenal. OS X allows for different settings while under battery power: an energy saving mode that clocks down the CPU, normal mode and performance mode. Apple claims it can do 6 hours without Wi-Fi enabled, on the energy saving mode, with low brightness. I believe it. On a full charge, I have done roughly 4 hours on the medium brightness with Wi-Fi. This beats the less than 2 my old notebook did on the regular battery. If that isn't enough for you, Apple sells additional batteries going for about 116 USD each. Wi-Fi reception was also great, able to receive a strong 802.11g signal throughout the house.

All current Apple notebooks include an accelerometer so that they can detect whether the laptop is falling and park the head of the hard drive to prevent catastrophic damage. What's even better is that people have written nifty programs that utilize that sensor for tasks such as an alarm system, a MacSaber and a "smackbook."

I will be using this MacBook as a laptop and desktop, so I picked up a mini-DVI to DVI adapter on my way out of the Apple Store. It works well and there are no noticeable video slow downs when using both the laptop screen and my 20 inch Apple Cinema Display. I recommend testing to see if your new MacBook's mini-DVI port works, as Colin's mini-DVI port was DOA on his MacBook. MagSafe and iSight are also nifty features that do their job well. 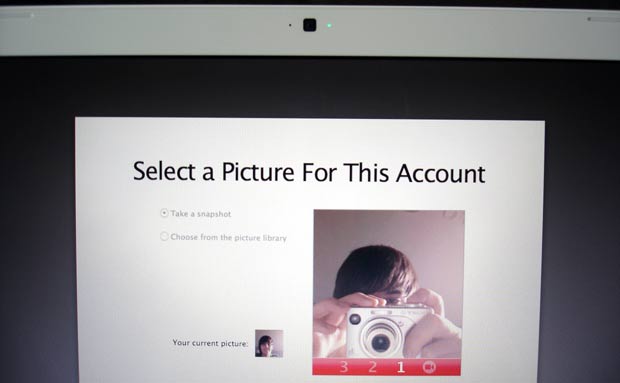 The speakers are amazing. They are located at the top corners of the housing so that the sound bounces off the screen, providing the illusion that the sound is coming from everywhere. It's rich in bass and treble so it can satisfy any type of music aficionado. It can also reach a fairly high volume level without distortion.

There honestly isn't much I don't like about the MacBook. However, one small gripe is that the edge of the case has some sharp plastic which tends to dig into my wrists when typing. Also, the glossy exterior of the white MacBook isn't too good for scratches. Scratches are easily made, even from sliding it in a protective sleeve. I must also mention that the bottom left of the MacBook does get quite toasty but should come in handy in the winter months in Atlanta.

As I mentioned earlier, my MacBook has only 512MB of system RAM for the time being. I said in this article that 256MB of RAM won't cut it. I was wrong. Not even 512MB of system RAM will cut it. You know what they say... "512 is the new 256." Don't even consider using a MacBook with 512MB of RAM, unless you really, truly have a passion for spinning beachballs. However, given the system specs with the powerful CPU, when provided with more RAM I can say that this computer will be blazingly fast.

It might just be me, but the power adapter, while small in size, has a propensity to make a hissing sound when charging an empty or low battery. When the battery is more full, the adapter is silent. This is somewhat typical of chargers, though. But this is only a nuisance if it's on your desk and the room is silent. Other than that, the MacBook doesn't seem to emit any whining sounds as the first revision of the MacBook Pros did.

While the trackpad's huge size can be a good thing, it can also be a bad one. When using it, I often accidentally have my other hand touching some part of it causing the cursor to move sporadically or not at all.

The MacBook is attractive with its widescreen 13.3 inch form factor. However this is a strong drawback when it comes time to find a case/bag for it. You will be hard pressed to find a case that fits well. It's only a matter of time before the market starts to accommodate for the MacBook, but for that early adopter there isn't much that can be done. Since I needed a case ASAP, I had to resort to the only 13.3 inch bag I found. (Update: SFbags.com makes a nice sleeve.) I only wanted a sleeve so I could put the MacBook in my messenger bag and go on with my business but now it looks like I'll be waiting for the perfect sleeve.

Apple has finally begun to reach the masses with the great value of the MacBook. Starting at 1099 you can get a dual-core widescreen laptop with Wi-Fi, Bluetooth, integrated camera, amazing software and even better build quality. I really hope we start seeing an increase in switchers. Apple truly has a great platform that more people need to take a minute from their Windows rigs and consider. I don't think you can find a PC laptop with as many worthwhile features (ie, not those gimmicky additions like an 8 in one card reader) at a price like the MacBook's. If you're reading this on your PC, do me a favor and take a trip to your local Apple store and play around with a MacBook. If you already have a MacBook please leave a comment and let me know what you think about it.