After arriving home for spring break, I was greeted by several packages that I had ordered. I opted for an Apple Intel Mac Mini with a SuperDrive and a 1.5GHz Core Solo processor. Before you start knocking on the Core Solo, I must say that this is only temporary and will be replaced by a faster 1.83 or 2GHz Core Duo once those CPU prices become reasonable. Upon opening the package, nothing really caught my eye compared to the old Mac Mini's packaging with the exception of the inclusion of the IR remote, ideal for Front Row, which has many uses. One thing I did notice was that the power supply had a slightly thicker cable going to the mini; likely more insulation and smaller gauge wire (the smaller the gauge, the thicker the wire) for the increased power demands of the Core Architecture based system. I will try to cover some of the smaller details that have been overlooked in other reviews.

The new Mac Mini sports the same form factor as the previous mini, but welcomes a new layout to the backplate. There are now 4 USB ports, a line-in audiojack and gigabit ethernet in addition to a firewire 400 port, DVI, a headphones jack and power port.

I immediately set it up, pushing aside my computer science homework due at midnight that night. The standard mini has 512MB (2 x 256MB) of DDR2-667 in the smaller SO-DIMM 200pin format. The two slots allow the new mini to hold a maximum of 2GB of system memory, which comes in handy as the onboard graphics powered by Intel's GMA950 chip shares system memory.

Spinning beachballs. That's the first thing I saw when it was booting up for the first time. After giving the install manager my info and getting to the desktop, it was more of the same. I don't think 512MB will cut it on a new mini. I also noticed that the white power LED is actually dimmer than the older mini. I think Apple actually researched into their typical use and saw that people using them as HTPC's don't like a white LED shining in their eyes while a movie is playing, or projecting an 8 foot circle on the opposite site of the dorm room wall whilst students are sleeping/passed out. Another thing to note is that the new mini is actually a bit louder, something I can justify as seen by the larger, offending Delta fan in the pictures further down. However, this was only noticable a few feet from the mini. If it is going to be used as an HTPC, it will be seemingly silent on your equipment rack.

I only tinkered with the stock mini for about five minutes before putting my putty knives to work and opening it up for some needed upgrades. On hand were 2 1GB DDR2-667 sticks from OWC and a 7200rpm, 80GB Seagate hard drive from Newegg. If you have ever opened up a PPC-based mini, you might have to scratch your head a second before figuring out how to dismantle the Intel Mac Mini. Once the cover is off, there are a few new things to notice. First off, the bluetooth and airport antennas are held on differently with a spring and clasp mechanism. Also, the drive cage has several cables on it, including a flat ribbon cable connecting it to the mainboard. This means you cannot completely take out the drive cage, rather you will most likely flip the cage upside down next to the mini. If you are going to be upgrading your new mini, OWC has a great video showing all the steps. 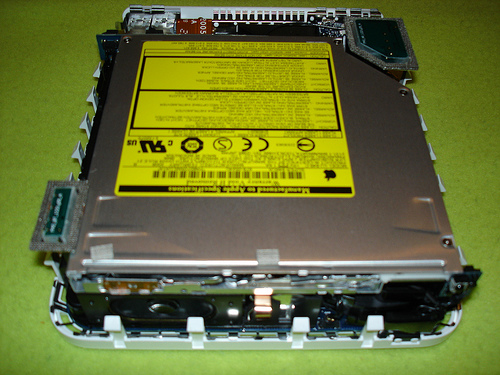 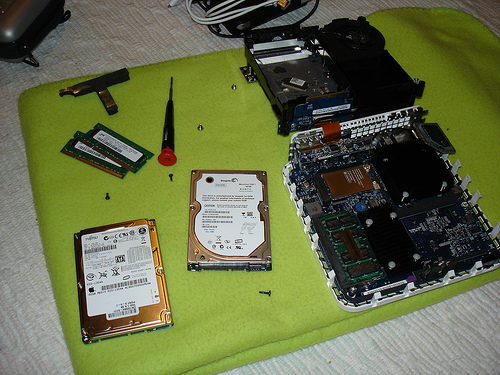 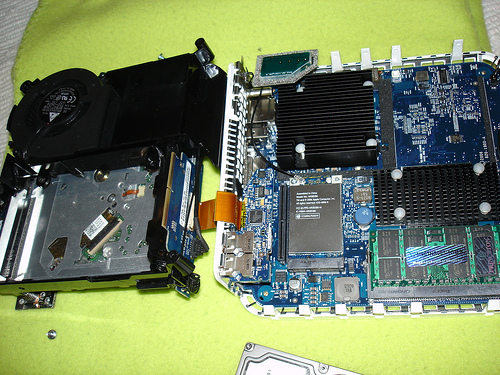 After I popped off the drive cage, I was able to see the stacked memory slots. As mentioned before, this mini has two RAM slots compared to the older mini's one. Also, the new mini utilizes a Serial-ATA interface, capable of up to a 150megabit/sec throughput, for the 2.5" hard drive. This is a well needed upgrade from the ATA interface previously used. Once I got my head around the slightly different procedures I was able to replace the memory and hard drive easily. I was reconnecting cables and booting it up no more than 5 minutes later.

I had to install OS X from the 2 included install DVDs since I replaced the hard drive with a faster, fresh one. Nothing new was discovered in installation, same old routine; open disk utility, format the drive to Mac OS Journaled, start installing OS X, open up a coke and wait.

After the installation festivities had passed and I had been interrogated by the first-boot information manager, I was looking at a pristine desktop with no beachballs in sight. Opening up the About This Mac dialogue had confirmed that my 2GB of memory was correctly recognized by the system. The first thing I did was fire up Monolingual to free up some space by removing languages I don't need. I saved a whopping 2.5GB of disk space by doing that.

While this is only the Core Solo model, I can say that it is fast. The 2GB of RAM really helped out. All of the iApps (iTunes, iMovie, etc.) and Safari are universal binaries, the term used to distinguish applications built for the Intel processor and compatible with the PPC architecture, so they run natively. iTunes runs extremely fast and video playback has constant framerates. Seeking (dragging the slider) within a video file in iTunes or Quicktime is also much faster. This activity used to be a task for the PPC Mac Mini.

The way non-universal binary applications on Intel Macs work is that there is an application in the background called Rosetta. Rosetta translates PPC code for Intel CPU's in the background. It does a pretty good job, but things like Adobe Photoshop CS2, which won't go UB until CS3 in ~12 months), are slower than on their PPC counterparts. That being said, I started using the UB Firefox beta. While Rosetta is supposed to be able to handle every PPC application, I have found several instances of incompatibility. For example, Flip4Mac, a WMV player, won't even install. The case is the same with Application Enhancer. Then there are the applications that work, but just act weird, such as Barquee and the UNO theme.

To give you a better idea of the new mini's speed, I compared boot and shutdown times with my old 1.5GHz PPC mini. The new mini, after installing a bunch of apps, was able to get to the desktop and show the time in 45 seconds, something the PPC mini struggled with for 70 seconds. The Intel Mac shutdown in 7 seconds with the other mini taking 11 seconds. I was not planning on any further benchmarks as more than enough can be found at ArsTechnica and 123MacMini.

I then started browsing some of the installed applications, such as Front Row. Front Row is Apple's late foray into the HTPC market dominated by Windows Media Center pc's, Tivo's and other such miscellaneous PVR. I had played with Front Row on my old mini, albeit a hacked up version, but it ran much smoother on the Intel mini. I love Front Row's simplicity. As I told Peter Burrows from Business Week magazine, I can absolutely see the new mini being used as a living room home theater computer. The form factor, excellent software, simple yet effective remote and speed provided by the Intel Core Architecture along with the chipset's GMA950 onboard graphics, capable of hardware MPEG decoding and two simultaneous HDTV streams, coalesce into a fantastic media device. Apple hit it right on the money.

Front Row lets you enjoy music via iTunes whether it be on the local machine or a Bonjour-networked computer sharing music. You can display all your albums from iPhoto, indulge in videos controlled by iTunes, such as video podcasts, music videos or TV shows, as well as stream trailers directly from the Apple website. Front Row also enables users to experience trouble-free DVD playback, all from a user-friendly interface. I seriously think Front Row is something my mom would be able to use. Keep in mind, my mother still calls me to help her turn the internet on. I can definitely see Front Row coming in handy next year when I will be living with three of my friends and purchasing a projector.

I tested out Front Row last night with some friends and The Transporter 2 DVD. Remote in hand, I did not have to get up from the couch once. One thing to note is that when you stick in a DVD, Apple's DVD player likes to automatically open it up making the DVD unusable by Front Row. You can fix this in DVD Player's preferences by unchecking When a disc is inserted: Start playing disc. 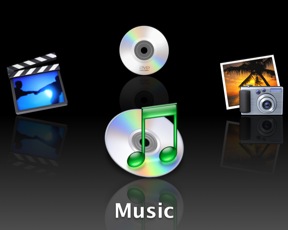 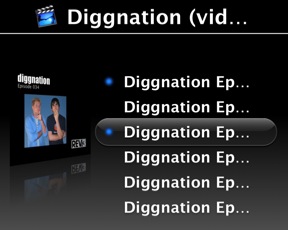 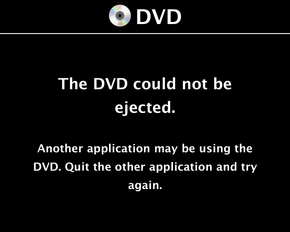 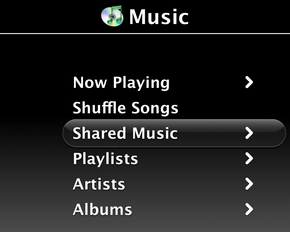 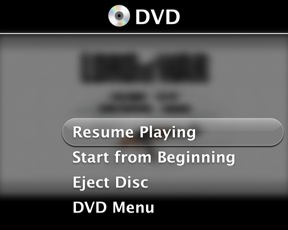 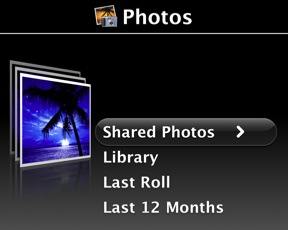 Getting back on topic, the remote is a well-deserved addition. Pressing MENU pops open the Front Row menu, where I chose DVD and started playing the movie. Several times throughout the movie, someone got a call but I was easily able to pause the movie until they did their business. The remote works extremely well. The IR sensor inside the mini is hidden inside the optical drive slot to the right. I tested the remote from various directions, pointing from behind the mac and get this, pointing past the mac as in the remote was on top of the mini. It all worked flawlessly, with a range of at least 25 feet. I highly recommend glancing over this article that explains the uses for the remote outside of Front Row.

However, I have to air some grievances. I will eventually lose the remote and Apple has done nothing to help me out with this. On the iMacs there is a magnet allowing the remote to be stuck to the side of the iMac when not in use. The Mac Mini has no such feature and I often find the remote hiding in the most obscure places in my room. Well, at least there's the option of replacing it for 29. Also, take this scenario for example. I'm watching a video podcast in Front Row and get an IM or a new email sound and I want to check it real quick. I have to exit Front Row, but there is no "minimize" so I end up completely exiting Front Row, losing my place in the video file. This isn't too bad if you are watching a DVD as there is a resume type feature, but this isn't so with other aspects of Front Row.

Despite the minor problems I had faced, I think the new Mac Mini is a monumental stride in the right direction. Apple recognized the primary use of the Mac Mini as a multimedia centerpiece and beefed up the hardware and added Front Row to support that new lifestyle. For those using the Mac Mini as a desktop computer, there are still plenty of benefits to reap. From the performance stance, the move to DDR2, a SATA hard drive interface, Gigabit ethernet and the inclusion of more USB ports was welcomed. Apple did, however, get rid of the 499 price point to support these new luxuries.

For still being Apple's entry-level computer, the mini hold exceptional value even with the increased price tag. I was thoroughly impressed by the performance and am waiting for further surprises down the road as more mainstream applications become universal binaries and become less dependent upon Rosetta translation. Out of all the improvements to the Intel Mac Mini, I think the inclusion of 4 USB ports was the most worthwhile. Now I shall play the waiting game and be on the lookout for a cheap Core Duo processor to upgrade with, as described in these previous posts.