You have probably heard of a company called GrandCentral a few years ago. They made big news with their September 2006 beta launch of their service allowing people to use a single phone number for all of their phones. David Ulevitch of OpenDNS was the first person I knew that began using GrandCentral full-time. He had a single number that rang his office phone and mobile phone at the same time — a real convenience (of course GrandCentral could do many more things moving into 2007). At the time there were several latent issues with the mechanics of their service. If I sent David a text message, he wouldn't receive it on the mobile phone he had linked to his account. Add on to that my confusion when he would call me back from a different number than his GrandCentral number, and it was no wonder that GrandCentral was only attempted by the tech-savvy elite.

I am of course talking about the basis of Google's latest offering: Voice. Google snatched up GrandCentral almost exactly 2 years ago for a rumored 50M USD. Their plan? Turn GrandCentral's offerings into a seamless experience suitable for anyone. After the acquisition, Google cut-off further GrandCentral user registrations while they transformed GrandCentral into Google Voice. Well the transformation is complete and Google Voice went public (well you still need an invite for the time being) last month.

If you're completely new to Google Voice, here's a short video from the Today Show that shows it off. They bring up a downside of Voice as being a privacy issue.. would you trust Google with all your voicemails and phone calls? I think that's a moot point as most people already trust Google with their email, but I digress.

So what does the newfangled Google Voice do that GrandCentral didn't? Well for one, you can text message a Google Voice number and rest assured that it will be properly forwarded to that person's mobile phone. When you add phones to Google Voice, it asks if the phone number you're adding is a mobile device, so it knows where it can and can't forward texts. 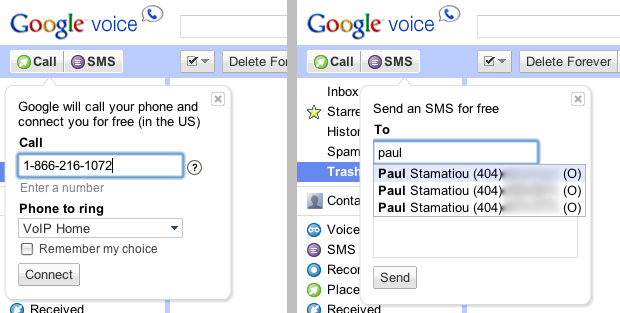 You can send texts directly through the web interface, as well as have it to connect calls.

As the sceenshot below shows, you might receive a lot of "wrong number" calls when you fire up your Google Voice number (in my experience). The same thing happened when I got my home VoIP line from Vonage. The number Google gives you is one they have acquired somehow, and in my two cases, very likely from people that had their number canceled from not paying or just didn't tell their friends/etc they changed their number for whatever reason.

Wrong numbers have proved to be quite a problem. Fortunately Google Voice has many ways of handling these things.

As such I get a lot of calls from people looking for others, and they can be quite persistent, especially from companies like DirecTV that keep calling trying to get a hold of the previous phone number owner and never leave messages but just call back everyday. Regardless, handling unwanted calls in Google Voice is a breeze. Just like email, you can report a call as spam. The next time they attempt to call, they'll receive one of those "this line has been disconnected" messages. 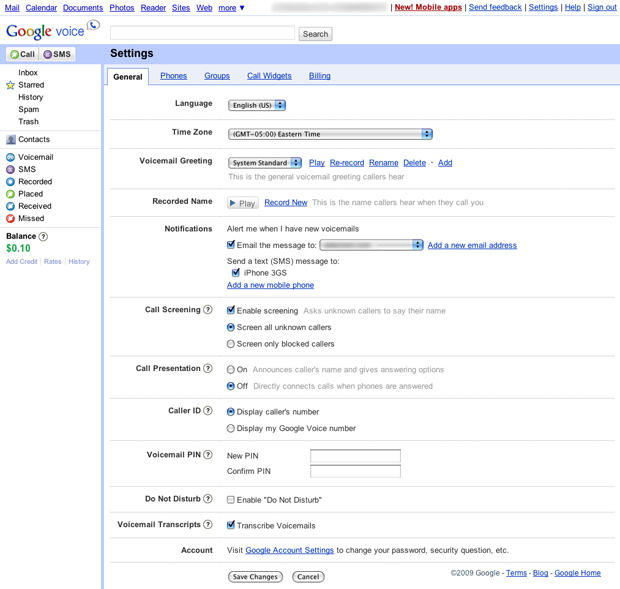 I enabled call screening which requires first-time callers to say their name if they're not in my contact list, which I loaded in from an OS X Address Book export using a small application called Address Book to CSV Exporter. Furthermore, Google Voice allows me to sort people into groups, each with separate actions associated with them. 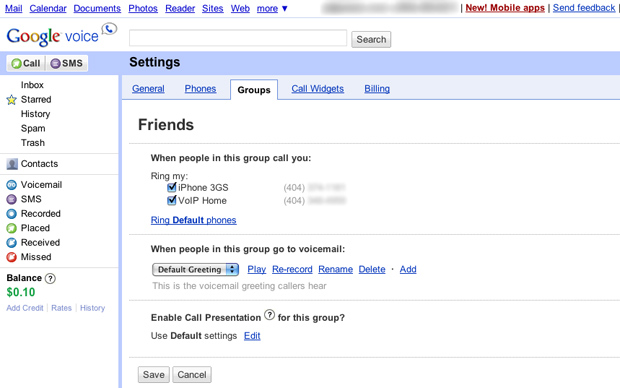 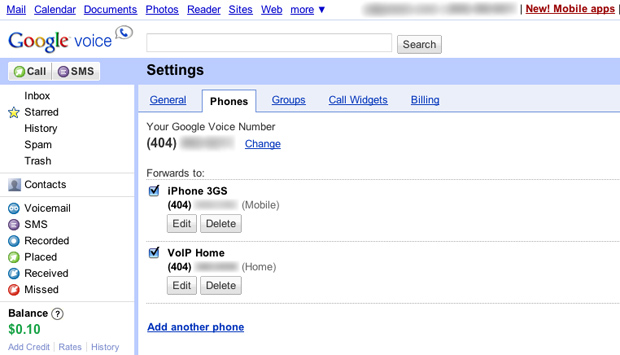 Google Voice stores all of your SMS converations online, in addition to voicemail messages that you can playback. Voice can also transcribe voicemail messages and then text and email you the voicemail message. I've found that especially handy if I can't take a call (meeting or driving) and a few seconds later I receive a text message with the voicemail's content. As for the accuracy of the transcription, well that's up for debate. I've heard everything from "total crap" to "pretty good." In my personal experience, I definitely think it needs some tweaking. I find it very handy though that it picks up phone numbers in voicemail messages and links to them.

Voice's transcription of a real voicemail of mine.

In the example above, text that is slightly grayed out is where Google Voice wasn't 100% sure of what was being said and had to guess. Overall though, this particular transcription isn't terrible and anything it wasn't sure about is pretty easy to figure out based on context or actually listening to the voicemail.

If voicemail transcription is a big deal to you, check out David Gallagher's two posts in the NY Times below. He asked his readers to call his Google Voice number leave some creative voicemails. He then posted the audio alongside the Google transcription. He highlighted lots of situations where Google's transcription tripped up considerably.

Voice can do some other things, such as record conversations (press 4 anytime during a call that you received, unfortunately it makes it obvious to the other party that you are recording.. so no sneaky stuff), but the point of this article is to show you my thoughts on the service and not explain what it does.

First off, why am I so intrigued by Google Voice? I really, really like the idea of having a single number with features that are kind of like a firewall in a sense. I can setup various rules for different groups of people. I can have certain groups go straight to voicemail and hear a particular message (say if I'm on vacation and don't want any business calls), all the while letting calls from friends and family get right in. Add on to that easy ways to entirely block calls, as well as voicemail transcription, and Google Voice becomes extremely attractive.

Almost better than all of that is the ability to easily add and change phones tied to your Google Voice number. If I want the latest mobile phone, I don't have to worry about trying to port over my current cell phone number to it. I just add the new phone number to Google Voice and let it handle everything. That's huge for me so I can try out the latest mobile phone without having to worry about porting over my number (and I can signup as a new customer and take advantage of those subsidized phone prices).

The problem is telling everyone my new Google Voice number. Right now, only a handful of people out of the ~100 regular contacts I keep in my phone are aware of my Google Voice number. However, it has been reported that this will soon change and Google will let you port your current number over to them:

Today you are issued a new phone number when you sign up for Google Voice. But we’ve confirmed that a very small number of people have ported their existing numbers to Google (Google uses Level3 to handle phone numbers). In the U.S. it’s possible to port any phone number to another service provider - even a mobile number to a voip provider like Level3.

Oh and I can't forget to mention how convenient it is to be able to access everything from a familiar GMail-like interface online. But don't worry, you don't really need to use the web interface after you set everything up.

Of course there are still a few issues that need to be considered. One particular issue from back in the GrandCentral days still exists - if you call someone on your mobile phone, they'll see that phone's number instead of your Google Voice number.

Bridging the Gap with Mobile Apps

However, Google has figured out how to solve that issue too. They are deploying mobile applications (currently Android and BlackBerry) that take over the phone's native dialer. Or at least that's the idea. The experience isn't quite the same as just calling a contact from your mobile phone. For example, with the Android application the phone (with the Dial Out setting) first calls Google, then you wait a bit and it automatically begins dialing your contact. There is also the Callback setting that, similar to the web interface, calls your phone and then when you pick up it starts ringing your contact. It's a different way of doing things but overall a small price to pay to have such a powerful Google Voice number.

Fortunately I was a GV Mobile application user before it was pulled from the App Store and am able to share some of what the application did:

Some of the features of the GV Mobile iPhone app.. that has since been pulled by Apple/AT&T.

Similar to the Google Voice web interface's call connect feature, calls initiated through the GV Mobile app lead to you getting a call from your Google Voice number and when you pick it up, the other end will begin ringing.

I've only scratched the surface of Google Voice. There are a lot of ingenious ways to get the most out of it. For example, until mobile applications create a completely seamless Voice experience you can save each person's unique "406" number. I've linked to a much more detailed article on this at the end of this post, but in a nutshell, you text someone with your Google Voice number via the web interface and assuming you have text forwarding on, you will get their reply on your mobile phone as coming from a 406-XXX-XXXX number that you haven't seen before. Save that number and text that person back using it, instead of their real number. That way it goes through Google Voice and they see the text message as coming from your Google Voice number. Yeah, it's kind of hacky but that's the current state of Google Voice.

Also, fellow Georgia Tech alum James Rintamaki wrote a great guide on how to Use Gizmo5 for free calls with Google Voice and hook up an ATA device to get free calls using a landline phone. If you know of any other such neat Google Voice uses, please share it in a comment.

I know this isn't a full review as I haven't really put Voice to the test yet, but if I had to rate Google Voice, it would get a respectable 8 out of 10 Stammys from me. The big issue will be creating a seamless calling experience from mobile devices; having to launch another application instead of use native phone functions to call someone is a bit annoying. Apple/AT&T blocking Google Voice applications on the iPhone (Google Voice is a huge threat to carriers) isn't helping this situation one bit, and it doesn't seem like I will be getting that experience I'm looking for. If this keeps up, an Android phone will be in my future (HTC Hero?).

So you just got your Google Voice account and want to jump right in — here are a few must-reads:

Thanks to @Chanathan for pointing me the great resources above, and Jeremy Seger and an anonymous user for their Skribit suggestions that I take a look at Google Voice.

Are you a Google Voice user? If not, why? Are you waiting for better mobile phone integration? If you are a user, how do you like it so far? I for one would love to port my cell phone number over to Google Voice. Or I could buy this number (GV lets you search for numbers and purchase for a one-time fee of 10):