Around the time that Facebook unveiled their iPhone mobile site, Josh Lowensohn at WebWare praised the iPhone-optimized version of Facebook for doubling as a massive phonebook on the go. He was absolutely correct. You have many friends on Facebook that list their phone numbers, which can come in handy whether you're looking for Anna's number on the go or Jim's number while at home on your computer. Naturally, Facebook's use as a phonebook lends itself to be used in a variety of situations. Case in point, my Friday night.

It started out as just another night in the intense life of socialite Stammy (sheer sarcasm). It was 1am and an entourage of 30 people were congregating at a friend's condo about to head to a club down the street. This was in Midtown Atlanta, an area known for being generally upscale and posh. We all trekked out to the club on foot but my roommate Dan had to stop by his car to drop off his SLR camera that he dared not bring to a club. Dan parked on a residential street right behind the highrise condo building. After putting the camera in his car and beginning to walk to the club, two built guys took Dan by surprise and beat him to the ground, taking his phone, wallet and keys.

After recovering, he went to the condo's concierge to call the police. But now he had to get a hold of me and the others. The building had a public computer so Dan was able to login to Facebook and find my phone number along with the numbers of a few friends in case I didn't pick up. Fast-forward 15 minutes later, Chris (other roommate) and I were with Dan, helping him call a tow truck to tow his car back home, cancel his credit cards and phone. 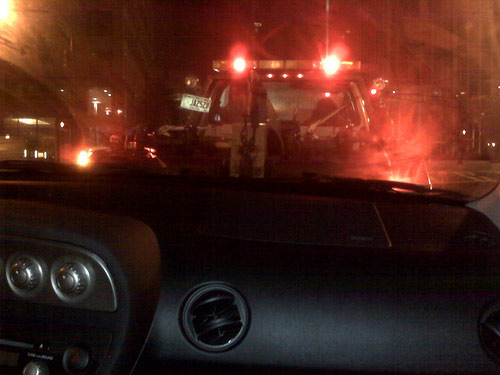 Inside Dan's car, getting towed back home.

I wouldn't have thought that a social network could ever help anyone in a real world situation but it certainly did. This is something people didn't think about when Facebook first rolled out Feeds and privacy issues suddenly became a concern. You might want to keep your phone number listed on Facebook, even if only for friends, because you never know.

How would you have gotten a hold of your friends if you didn't have Facebook? Do you know of any other services that could help in any emergency situation?