As I mentioned in my Detroit Auto Show 2008 post earlier in the week, the overarching theme of this year's North American International Auto Show was without a doubt going green. Traditionally gas-unfriendly domestic auto manufacturers unveiled hybrid, electric, fuel cell and ethanol concepts left and right. After an interview with GM Vice Chairman Bob Lutz, I was able to get an idea of where GM was headed in the future. Overall, there are several viable ways to power vehicles in the future but there is no clear winner so auto manufacturers will be focusing on R&D.

In the very near future, Ethanol-powered (E85 is a mixture of 85% ethanol, 15% gasoline) engines will start to penetrate the industry. Something like 5 million GM vehicles capable of running E85 are already on the road. The only problem is producing the ethanol and installing the necessary infrastructure to support it - installing pumps at fueling stations, getting more ethanol-friendly engines on the road and so on. Then there are the people worried about how relying on ethanol might affect crop prices as wheat and corn-based ethanol production could slow down the farming of other crops.

Then there are of course hybrid vehicles which run a small gasoline or ethanol powered engine at high speeds and otherwise rely on electric motors to drive at low speeds. Other fuel saving techniques are employed with hybrid vehicles such as degenerative braking to charge batteries as well as cutting off the engine at idle. Now that hybrids have proven their value in small vehicles, they are making their way into larger vehicles including full-size SUVs and trucks. 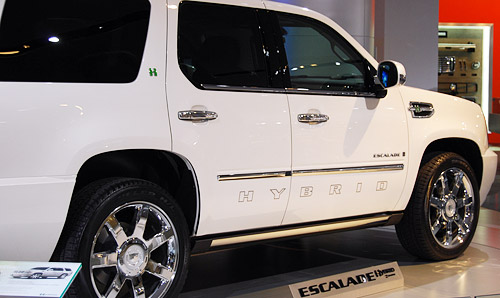 An interesting thing I discovered at NAIAS was a steady interest in efficient diesel engines. Residing in the United States, I don't know how well diesel cars will work out. I hardly ever see diesel pumps at most fueling stations. Regardless, the merits of diesel engines are hard to ignore. Audi even released their R8 V12 TDI concept pushing 500BHP, 737 ft. lbs of torque and a great (for a sports car) 23MPG rating. 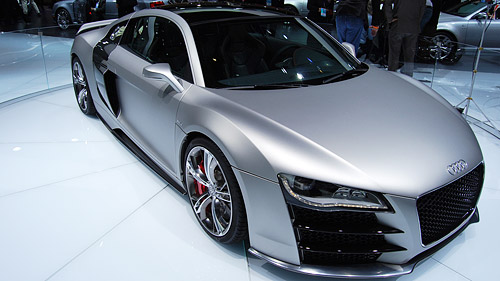 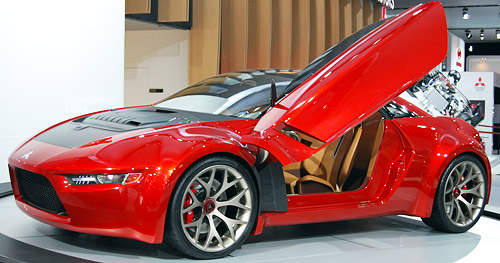 Even Mitsubishi is toying with diesel with their Concept-RA: 2.2L clean diesel pushing 201HP, 310 ft. lbs of torque.

Like driving around town with 6kg of hydrogen compressed at 10,000 PSI under your seat? Neither do I but hydrogen fuel cell technology is another technology of interest to manufacturers such as BMW with their hydrogen 7 and GM with their Provoq concept. Converting hydrogen to electricity results in only pure water vapor for exhaust - that's just about as green as you can get. From the infrastructure point of view though, harvesting, transporting and compressing enough hydrogen to power even a portion of the cars in the world will be quite a feat. 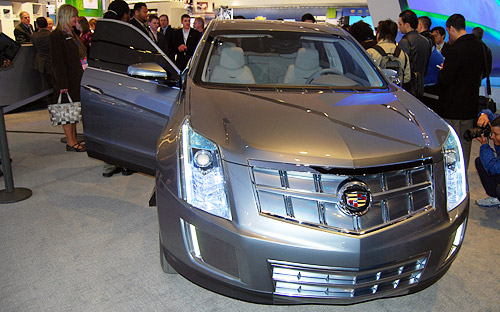 If I had to choose one non-fossil fuel propulsion system to power my next car, I would likely go with a plug-in electric system. While manufacturers will still need a few years to work out creating an efficient and safe battery system for these types of vehicles (GM was talking about an alternative to Lithium-Ion batteries that is safer, hence no random explosions a la laptop battery), the advantages are clear. No more driving to the gas station on your way back from work. Just plugin every night in your garage.

Then there's the issue for garage-less people. What if you live in the city and park in the street? Well, maybe we'll start seeing curb-side plugin receptacles in a decade.

The plug-in Chevy Volt is one of the most talked-about electric concept. It has a small engine but only for charging the batteries as a backup plan.

Another advantage to electric vehicles is the potential for selling power back to the grid at peak usage times.

I would love to see where plug-in electric vehicles are in 10 years. They seem very convenient. Every morning you can head to work in a car with a full charge. There isn't much infrastructure to build out for electric vehicles so the only hindrance is developing the perfect battery - one that is reliable enough to maintain capacity after thousands of cycles and safe enough to work in a variety of conditions with varying amounts of rapidly-changing load. Oh and if you work for Google in Mountain View, you're already good to go. Some of their covered outdoor parking areas have power lines for charging plug-ins.

Personally I will be sticking with gasoline muscle cars for a while. While fast electric vehicles such as the Tesla Roadster do exist, they don't have the rumble of a high-displacement engine that I've grown up with. What about you? Which car technology would you like to see now?