Dash is the name and revolutionary automotive navigation is the game. Dash has been developing an Internet-connected GPS device that taps into services like Yahoo! Local Search, provides you with ridiculously accurate traffic reports by talking to other Dash units on the road and anonymously checking their location and speed, and much more. I had the chance to play around with the original Dash unit while visiting Mike Malone in San Francisco and I don't know how we would have gotten around otherwise. 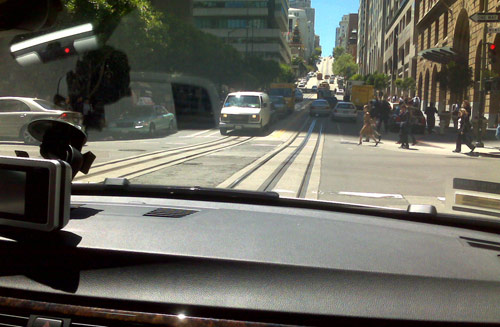 The older, fatter Dash unit pictured to the left.

When it worked, the old Dash unit was amazing. We could tap along and find a restaurant within the area or find an alternate route to the Golden Gate Bridge when there was traffic. However, we had many issues with the old unit. One time it froze and thanks to the internal battery we found no way to reset it until the battery ran out. Also, the older unit had a huge problem with connectivity to GPS satellites when surrounded by tall buildings in downtown SF.

Dash announced their revamped model, the Dash Express, today and it seems like it has fixed many of these issues. It has a much better design, the last one was ugly and had a small screen along with buttons that weren't necessary. The Dash Express has a larger 4.3-inch touchscreen, a USB port, a larger internal battery and a larger/louder speaker. 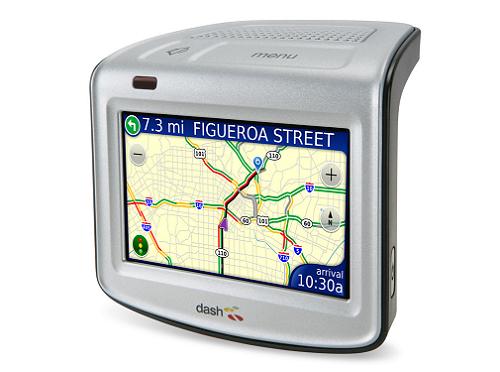 Gizmodo wrote about the Express today and I think they put it perfectly:

The difference between the Dash and all of the other dedicated portable navigators on the market is that it's got Wi-Fi and a GPRS modem built in, so that it can receive (and send) useful live information. If you're a user, Dash will know your commute and check traffic conditions, sending you an SMS when it thinks you need to hit the road so you're not late for work. Besides better traffic data, Dash is about local search: it gets POIs not from some static list but from Yahoo, so there's a greater chance of finding something up-to-date and appropriate to your needs.
Gizmodo

I know I don't mention it much around here, but I'm a huge car nut. The Dash Express is the first navigation system to really capture my attention. I don't own any navigation systems at the moment, but I have been relying on Google Maps on my BlackBerry whenever I get lost. You can't get a Dash Express just yet, but they should be popping up online around early 2008.

Do you use any gadgets in your car?

If you work for Dash, please send me an Express to review.