In preparation for DARPA's 2007 Urban Challenge competition in November, Carnegie Mellon University will be holding an event with their autonomous SUV tomorrow. The DARPA Urban Challenge involves several universities and many companies helping to develop advanced automotive technology that will one day be integrated in consumer vehicles.

As an added incentive for developing this technology, DARPA has designed the program as a series of competitive events with the grand prize being 2 million. General Motors flew me out to Pittsburgh, PA to take a first hand look at Carnegie Mellon's self-driving Tahoe named BOSS. The event tomorrow will showcase the SUV's basic navigation and traffic handling abilities. 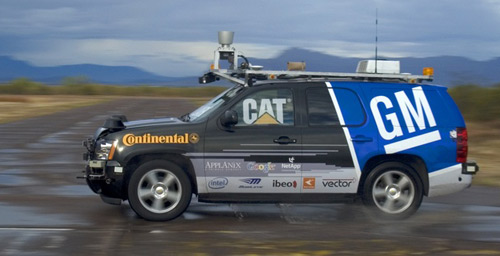 I will be meeting with many people involved with Carnegie Mellon's DARPA vehicle tonight and tomorrow so if you have any questions you would like answered about DARPA, the event or technology, please leave a comment. I will be accompanied by people from Popular Mechanics, Motor Trend, GearLive and others.