Aside from EMI announcing DRM-free music on the iTunes store, there have been other tech news pieces making waves this week. Most recently, Google updated their Maps offering to include something called MyMaps. MyMaps allows users to annotate and share (publicly or privately) their own maps. Publicly shared maps will be indexed by Google and can be searched through.

Users are able to create their own maps and mark them public or private. The annotation tools that are provided are very simple and easy to use. Users are able to add lines, polygons and placemarks. They can edit those placemarks with HTML, images, and video. Once a map is created it is very easy to share it and syndicate it via KML.

Moving to the hardware sector, Intel has added the vPro IT management bundle, which includes automated network security and remote troubleshooting, to Centrino. Intel Centrino is a platform found in many Intel-powered laptops combining chips dedicated to wireless connectivity with efficient, low power processors and chipsets that excel in battery conservation.

This new Centrino Pro offering is aimed at business customers, but will improve on the current Centrino platform by natively supporting 802.11n wireless, the Core 2 Duo processor and a more powerful graphics chip. Hopefully the new setup will provide enough juice to take on the Microsoft Vista operating system, which is good to know because a study states that a whopping 80% of business PCs are ill-equipped to run Vista.

PCWorld stated that Intel tried to make a deal with Nokia to provide 3G HSDPA wireless modules for Centrino. If Intel can seamlessly integrate WWAN connectivity to the Centrino platform, I truly believe that will lead to the proliferation of WWAN usage. Currently, people have to go out of their way to purchase and setup an EV-DO or HSDPA modem on their computer, similarly to how people had to install 802.11b cards and dongles 5 years ago. The next step after that would be getting the telecoms to offer more affordable access and even a contract-free offering where you can use the WWAN connection only when need be and not pay monthly.

Verizon Unlimited EV-DO not so Unlimited

Speaking of WWAN, Verizon Wireless came out of hiding and stated that their "unlimited" EV-DO broadband service was actually limited to a paltry 5GB download limit per month.

Verizon has been dropping customers for the past few years for excessive data usage, but the actual limits weren't until recently revealed in the terms of service (TOS). Verizon recently changed its TOS to indicate that the previously invisible download cap is actually 5GB per month.

It's a good thing I dropped Verizon when I had my Motorola Q problems back in August. At the moment, that post of mine is actually the first Google result when you search for "Motorola Q sucks" heh.

Sprint Kicks off Phase 3 of their Ambassador Program

While I'm on the subject of cellular services, I'll go ahead and mention that I'm part of Sprint's third phase of their Ambassador program. You might remember that I was also part of the first phase of the Ambassador program, a type of guerilla marketing tactic that Sprint employs by giving free phones with 6 months of service to bloggers. I'll let you know my thoughts about the Samsung Upstage M620 phone when I find the time. 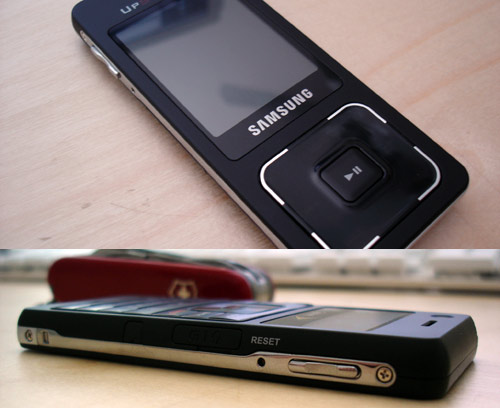 Ridiculously small with a screen on each side.

In Apple news, Apple updated their Mac Pro workstation line with new quad and eight-core configurations. The high-end configuration of the Mac Pro features dual quad-core Intel Xeon 3.0GHz processors, which is about a 1500 USD price jump from the default configuration of two dual-core Xeon processors. The only problem with having 8-cores is that you'll need to have plenty of RAM to keep them happy. Say your current computer is happy with 2GB of RAM for a single dual-core processor, effectively 1GB of RAM per core. To scale with that ratio of core:RAM allotment, you'd need to have 8GB of RAM in an eight-core setup. At that rate, it'll end up costing you a minimum of 5,700 USD through Apple. Although I can't imagine one could fully utilize eight cores unless you did heavy video/creative work like these guys.

Why You Should Avoid WEP Encryption

Finally, an article on The Register makes it clear why your wireless network should avoid WEP encryption and make use of WPA2.

Code breakers have discovered a technique for extracting a 104-bit Wired Equivalent Privacy (WEP) key in under a minute.

Perhaps someone would like to tell my neighbors about the dangers of WEP? Here are all of the Wi-Fi access points I can see in my third floor room in downtown Atlanta.