The past few days have proved to be noteworthy for those following the Blu-ray and HD DVD format war. On Friday, Warner Bros Entertainment announced that it would release its high-definition titles exclusively on Blu-ray discs beginning mid-2008. Warner Bros was one of the last movie studios to decide which format to go with and previously offered movies in both formats. This announcement means the ball will stay in Blu-ray's possession for good. 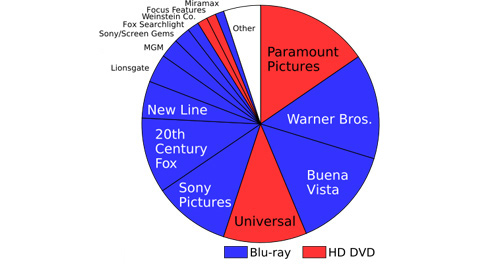 Speculation: Since most of the major film studios are releasing movies exclusively to the Blu-ray format, consumers will naturally purchase Blu-ray players rather than HD DVD players. That will cause HD DVD sales to suffer and force the studios still releasing movies exclusively to HD DVD to reevaluate their strategy and move over to Blu-ray. By this time next year I think Blu-ray players will have started selling like Asus Eee PCs.

I'm interested in seeing how Microsoft will deal with this news. Their Xbox 360 console supports HD DVD (via an add-on). Will the next Xbox move to Blu-ray? Rumor has it that Bill Gates will be having an "important" Xbox 360 announcement at CES this week. Perhaps the Xbox 360 will be updated to include an HD DVD player as standard for one last attempt at unseating Blu-ray from its shiny throne. Even if that were too happen, it's too little too late. It's out of Microsoft's hands to change the industry. Ex-Microsoftie Robert Scoble believes Blu-ray is the way to go too.