After a near month-long delay, Apple has begun shipping their Apple TV units which provide a long-needed connection between the media on your computer and your high-definition TV. Walt Mossberg of the Wall Street Journal took the Apple TV for a spin.

Apple TV is a pleasure to use. Setup was stunningly simple. We just plugged the unit in and hooked it up to the TV with a single cable (not included).

The Apple TV retails for 299 and features with a 40GB hard drive but unfortunately does not include the required component cable, as noted by Gizmodo in their Apple TV unboxing. You'll want to avoid the Apple TV unless you have a 16:9 capable television set; Apple TV won't look too appealing on your CRT. 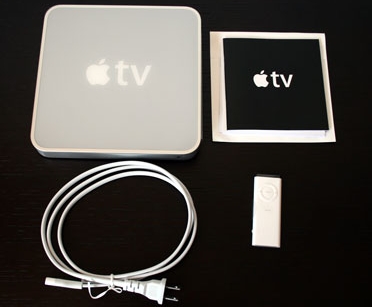 Will you be picking up an Apple TV anytime soon, or will your cash be better spent on rent or an iPhone?