Just as the rumors expected, Apple updated the iMac line with a substantial design refresh - aluminum & glass body, black accents and a slimmer physique. While I appreciate the move from using plastic for the body to aluminum, such as with the MacBook Pro, I'm not sure if the black accents win me over. Regardless, the new iMac line comes in 20-inch and 24-inch flavors; the 17-inch model is no longer offered.

More interesting for me though, is the new Apple keyboard based on the MacBook's keys. It's slim, light and oh so tactile. However, there is something that just doesn't feel right about bundling a laptop-esque keyboard with a desktop.

The higher-end 24-inch model is more pro-oriented than the rest with 2GB of RAM, an impressive 2.8GHz Intel Core 2 Extreme processor and a 500GB hard drive. 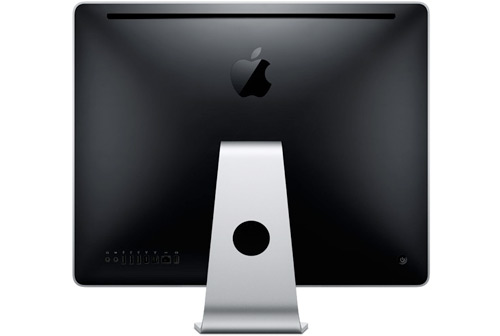 The new iMac supports up to 1TB of hard disk storage and similar to the recently updated MacBook Pro, up to 4GB of RAM. As usual though, these upgrades are ridiculously overpriced and you're beter off doing them yourself if you're up to it. For example, upgrading the high-end 24-inch model from a 500GB hard drive to a 1TB drive costs an extra 450 (a 1TB drive by itself costs ~380, and subtract from that the price of the 500GB drive..). When I got my 24-inch iMac (since sold) in late '06, it retailed for 1999, so kudos to Apple for somehow being able to drive the price down to 1799.

Mac Mini updates seem largely restricted to just a bump up to the Core 2 Duo processor and 1GB of RAM as standard. The Mac Mini wasn't even mentioned in today's Apple event aside from when someone asked.

The bulk of the Apple announcements today dealt with iLife '08 and the .Mac update. iPhoto received a considerable feature update with the ability to sync web galleries with .Mac, which now includes 10GB of storage and 100GB of monthly bandwidth as standard. iPhones also get some love in the mix with the ability to upload photos directly from the iPhone to the aforementioned online photo gallery. For the rest on all of the iLife '08 features, be sure to check out Engadget's top-notch coverage.

Now it's your turn to chime in. What do you think of all this? I will be picking up the new keyboard as soon as I get back to Atlanta, but I'm not sure if I want the Bluetooth version which has no numeric keypad, or the corded version with a numeric keypad.