No I'm not quoting a rap song today, I'm talking about my MacBook problems. I got my MacBook back two weeks ago after Apple repaired it for random shutdown syndrome. That was an adventure in itself, leaving me without the MacBook for almost a month. 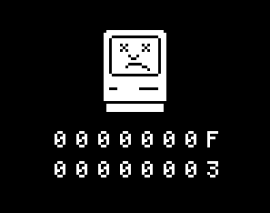 Unfortunately my MacBook now suffers from a different ailment. This time, the LCD backlight flickers and varies the brightness level all on its own. It usually doesn't occur from a cold boot but give it 10 minutes or so and it will start flickering. I'm not the only one with this backlight problem. There is a lengthy thread on the Apple discussion forums about it as well as a YouTube video demonstrating the issue.

When I had given Apple my MacBook they also changed the top housing as it was plagued from yellow discoloration. It appears they were working hastily when reassembling the MacBook because it feels rather ill-fitting. Some screws are overtightened causing the plastic to flex while others don't seem to be doing their job, allowing the housing to move irregularly.

It's all falling to pieces... I once used to love this thing. Apple what's going on? How many problems do I need to have before my MacBook gets replaced? Maybe I should consider jumping in on this class action lawsuit.