For as long as I can remember I have been using simple point-and-shoot digital cameras. They didn't have the greatest picture quality or zoom capabilities and were generally slow when taking consecutive pictures/charging up the flash. I had heard about DSLR cameras for years and took care (translation: loading/unloading the memory card) of an older Nikon D100 on my high school's yearbook staff, but I never really got to use one.

For the last three years I have been using a Sony DSC-W1 point-and-shoot camera and just about every picture I have ever taken and posted on PaulStamatiou.com was with that camera. While the pictures might have looked okay to you, what you didn't know was that I ended up having to take a dozen shots just to get one right. It was a frustrating process, especially when trying to get macro shots. That's all about to change.

Nikon's PR team and the MWW Group selected me as part of their Blogger Outreach Program. Along with 50 other bloggers/photographers, I received a 6 month loaner Nikon D80 DSLR camera with the 18-135mm lens. The D80 is an entry-level (so they say, seems pretty high-end to me) 10.2 megapixel DSLR camera boasting some impressive features. 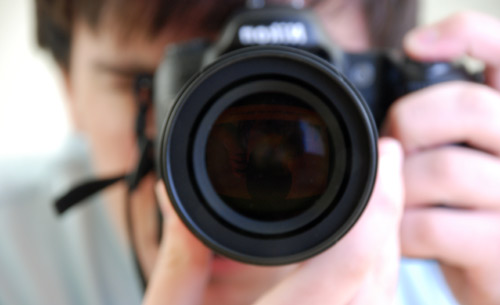 With a wide aperture you can get interesting pictures like this where only subject is focused.

How is a DSLR different from a P&S?

With DSLR, or Digital-Single Lens Reflex, cameras what you see in the viewfinder is exactly what you get. There is only one lens path with DSLRs so you can't use the LCD as a viewfinder as with most P&S cameras. However that is slowly changing with newer DSLRs that allow you to have a live LCD preview. DSLRs are also built around the ability to swap out lenses easily for expandability and multiple purposes. There are more things that differentiate DSLRs and P&S cameras but I honestly don't really know much about them yet.

DSLRs allow for unparalleled control of the camera. You have the ability to manually adjust everything from aperture, shutter speed, focus and more. If you're not into those advanced settings and just want a camera with great picture quality, most DSLRs like the D80 have several automatic point-and-shoot modes.

Most importantly for me though, DSLRs have the ability to consecutively shoot pictures quickly, especially in daylight. This makes them a breeze to use while driving by something or trying to capture a bunch of action shots.

This weekend I attended my sister's graduation from Texas A&M for her Master's degree. Here's a shot showing how far away I was sitting.. 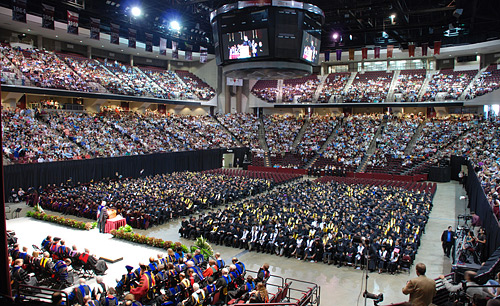 and here is a shot showing off the zoom and picture quality a Nikon D80 paired with the 18-135mm lens can achieve: 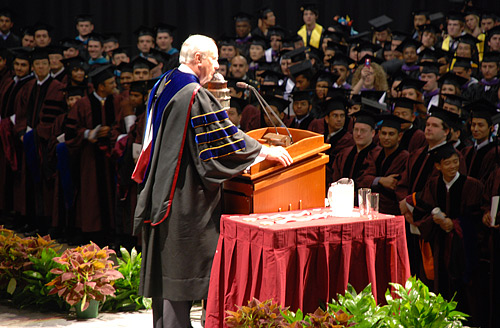 The photo below was one of the first shots I ever took with the D80. I don't think I could have ever achieved such a result with my old camera. Note: I adjusted the lighting levels in Photoshop from the original, but otherwise it's exactly what the camera took. 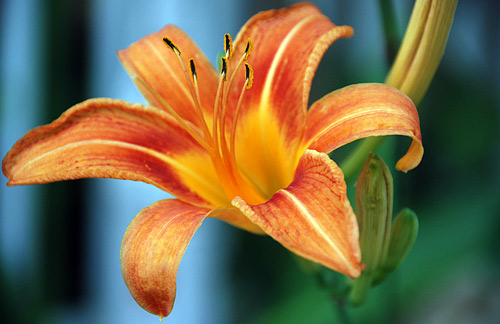 The point of this post was to let you know a bit about these amazing cameras. DSLR cameras have significantly come down in price over the last few years and are becoming viable cameras for regular, non-techie people and not just photo buffs. The D80 setup I've talked about in this post currently retails for somewhere around 1,200 USD, which can still be considered steep. However, cameras like the Nikon D40 (500-600 USD) and the Canon 350D (aka Rebel XT) offer excellent value.

Coming from my point-and-shoot camera background, the results from this D80 are nothing short of amazing. I don't think I'll ever be able to go back. Every hardware review I ever do from now on will be done with a DSLR camera. Have you had experience with DSLR cameras? Which DSLR camera do you have?

To clarify things again, I was not paid for this post and the camera is a loaner.