There are only a few ideas that really pop out at me and make my jaw drop. When Allison Rhodes of OpenDNS asked me what I thought were some of the best recent innovations at dinner a while back, I really didn't have anything to say and have been thinking about it ever since. Now I have my answer: Startup Weekend. 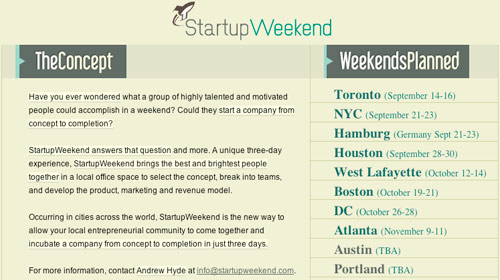 While you go to BarCamp to teach and learn, you attend Startup Weekend to build a startup company and a product from start to finish in one weekend. You leave Startup Weekend being a co-founder - pretty cool huh? But what's even better than the concept, thought up by Andrew Hyde, is how it's executed. Startup Weekend is happening in cities across the US, and likely to expand across the pond soon enough.

Startup Weekends begin on a Friday evening and the project is completed by Sunday night - about 56 hours. Before the event people coordinate via an online wiki to throw out some ideas for a company and product. When the Startup Weekend kicks off, attendees vote on ideas then dole out tasks (ranging from legal to back-end development) to everyone there. There's always something for someone to do and even if you can't code your way out of a cardboard box you can at least write website copy or provide feedback to the designers.

The first company created in a Startup Weekend was Vosnap, a web application facilitating group voting, created by 68 attendees in Boulder, Colorado back in July. Come November, I will be co-founding a company at an Atlanta Startup Weekend spearheaded by Lance Weatherby, an Atlanta-based Venture Catalyst who has more LinkedIn contacts than Reid Hoffman (kidding). Best of all, it's going to be held on Georgia Tech campus, just as next month's BarCamp Atlanta will be.

Who will own it?

Everybody who participates will get founders stock, and as it is set up, everyone that shows up and participates gets an equal share.

Startup Weekend is an excellent idea. As I've said before all you need is a great idea, but when it comes down to the nitty gritty, you need an idea, the know how to follow through or people that do, time and the ability to sustain yourself financially while doing so. Startup Weekend fast-tracks that process remarkably. I personally have several ideas that I would love to pursue if I had the time. Maybe one of my ideas will become a company in a few months, a la Startup Weekend.

What do you think about Startup Weekend? Some people are cynics but I'm a believer in this one.

Update: I came across Stan James' post mentioning what went down at the first Startup Weekend. This made an impression on me:

As soon as I walked in last night I was blown away by the hourly progress report: Legal team says "Company is incorporated and we're almost done with the terms of use." Creative says "We have 5 logo designs". Engineering says "We're integrating with id345 mobile platform and will have beta ready by 9pm". GUI team says "We've outlined the signup flow and have requirements for all functions." And so on. And that was a mere 4 hours after everyone met for the first time with no set idea what they were going to build.