Great coverage of the weekend can be found at Amro Mousa's blog as well as the official ASW2 blog. Skribit Co-Founder Calvin Yu and I kind of cheated a bit and worked on Skribit instead of working on one of the ASW2 projects. Rather than doing regular administrative tasks and working on closing Skribit Lighthouse tickets, we decided to focus on churning out one new feature. After having spotted many sites using static side tabs to link to lightbox windows and forms, we did some research. They are a great way of engaging users unobtrusively without taking up much of the website's screen real estate. So we went off and built this (now live on my site) on Saturday: 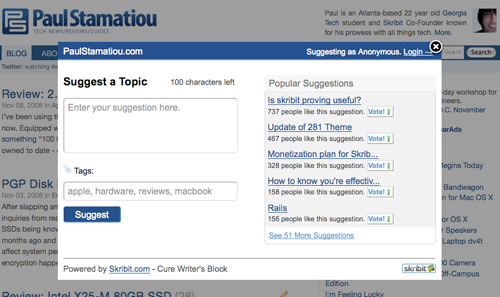 It has all of the abilities of the regular sidebar widget, which was also recently updated, of listing popular suggestions, the ability to vote on them as well as submitting a suggestion, but also has some great potential for expansion. It is only on a few sites for now until we add a few things and fix others.

For the past year, Skribit has been chugging along. While Calvin and I haven't been able to put as much time as we would have liked into Skribit, with his full-time job and with school keeping me busy, we have remained motivated and held weekly meetings at our favorite coffee shop to plan out the next stages and develop. 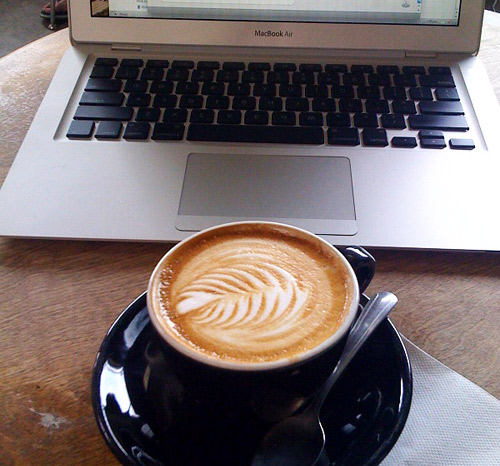 Aside from development tasks, I have pitched Skribit at Startup Riot, talked about Skribit at the TTI/Vanguard conference in Italy over the summer and talked with everyone from accomplished entrepreneurs to investors about Skribit. Needless to say, I've learned a lot in the last year.

Let me be the first to say that I graduate in a mere 33 days and will be working for Skribit full-time upon graduation. Aside from holding the Co-Founder title I will be doing product manager, community manager and front-end developer duties (until I learn enough about Ruby on Rails to put in some controller work.. I have a few Ruby books I need to plow through). That's one of the reasons I love startups. I won't be chained to doing the same mundane task everyday, but will be able to wear many different hats. The second best part about working for myself/Skribit is that I can tell my recently graduated friends, who rub their 80,000 salaries in my face, that my work commute is about 10 feet to a couch, clothes are optional and Froot Loops are always on tap.

For those of you not quite familiar with it, Skribit helps bloggers discover topics to write about from both their own readers as well as suggestions on Skribit.com that they can add. Suggestions can be voted on by readers to gauge interest. That's what Skribit does now. The only issue with that arrives if your website or blog doesn't have a particularly large audience and you don't receive many or any suggestions. In the near future we hope that several key updates from our product roadmap will make this a thing of the past.

We already have Skribit groups up, although they aren't linked to just yet, allowing bloggers to join say the "tech" group and easily find things to write about as suggested to the entire group. Users will also be able to find suggestions by browsing the site by tags or by full-text queries of topics that interest them and even being alerted of new suggestions that match interests they have noted.

But the real McCoy is when Skribit will be able to automatically suggest things for individual bloggers to write about. I can't disclose the inner workings of this but it involves analyzing reader activities, related users and blogs and using that data to identify trends that can aid in discovering topics and put an end to blogger's block. That is the end goal and we are in the process of paving a road to that goal.

The current state of the US economy has made it painfully clear that Skribit will have to produce revenues quickly to stay afloat. Fortunately, recessions are great times to run a startup as I've read about in countless articles on the Hacker News homepage in recent months. Skribit has 3 streams of income planned. The first is simply having paid 'Pro' accounts, aptly named the freemium model. We plan on launching the first iteration of Pro accounts somewhere around January. A Pro account will run 24.95 a year and offer features supporting multi-author blogs, running Skribit on multiple blogs, suggestion moderation and more.

Taking into account that most web apps like Flickr only have a few percent of their entire user base paying for Pro accounts, we are well aware that Skribit will not be able to rely on only that income stream. Instead, it is more along the lines of proof that users value Skribit and are willing to pay; something that makes potential investors feel warm and fuzzy inside.

At the moment Skribit is serving up a few million pageviews per month. As such, putting advertisements on select pages is an obvious choice for a second stream of income. However, the real revenue will come from a model that, of course, my lawyers have told me not to talk about until things are more ironed out. I will say that a) it solves a problem, b) larger entities will pay to solve that problem and c) bloggers will actually enjoy putting it to use. *further market research pending

I am extremely eager about getting out of Georgia Tech and working on something I am passionate about. This means I will be remaining in Atlanta for an indefinite amount of time. That and I can't move; the 75+ mbps fiber Internet connection in my apartment is keeping me here.

The next few weeks will be filled with papers, projects, exams and then finals, so blog posts will be sporadic.

Thoughts on Skribit? Thanks to all of the Skribit suggestions that spurred this post. Combined, there were 1,227 votes on those suggestions.