Many people have predicted what the future of the Internet holds. To each his own comes to mind as there are many different takes on what that future will be like. For some that future shows a vastly improved mobile web or the proliferation of open standards while to others the future places high value on security as web-based services replace desktop applications. Of course there is the canonical "web 3.0 is the semantic web" approach as well. I have always sided with Alan Kay's stance of "the best way to predict the future is to invent it." However, I am often asked what I think the future of the web holds, so here is my answer.

Take a look around at the current state of the web. Everything is about feeds and information overload. An entire subset of the technology industry is devoted to creating feeds of feeds (Friendfeed, Socialthing and their competitors come to mind). Information overload is currently the single largest issue facing webizens. How many articles about how to get things done and managing your email inbox have you come across online? 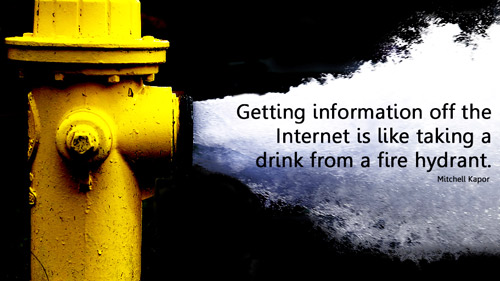 While I believe there are many aspects to the future of the web, from relying on cloud data storage and web-based services to the rise of mobile location-aware services and advertising, the core of the future web will be about technologies that help users cut down on information overload. That is, taking large amounts of data and providing the user with information relevant to them and people that matter to them. Technologies in this space are collaborative filtering, singular value decompositions (think Netflix's recommendations), artificial intelligence and latent semantic analysis.

I guess you could say this goes along with the "semantic web" concept of helping machines communicate with other machines and find relationships between data. In a fully realized form, these technologies will allow machines to learn and understand the tastes and preferences of the user and help filter through open data to provide the user with information they want, need and what they didn't know they liked. Abiding by the long tail concept (although a study recently proved otherwise), web users don't necessarily like only the popular items, making it hard for current systems to adequately predict what the user wants or is looking for. I'm not just talking about reading feeds, but rather sifting through any open, linked data on the web, which brings me to my next point.

The future of the web will usher in open data. Businesses need to stop locking up their data. Just put it out there. Users will embrace it and it can only help with business. Publishing 2.0 put it well in an article about data:

The future of the web will be determined by companies that can overcome people challenges — to bring EVERYONE’S data online, and make it useful. And it won’t be about locking up people’s data, but instead helping them be smart about the free flow of their data.

The future of the web is about efficiency. While the semantic web concept is about machines communicating with machines, we also really need a way for machines to understand humans.

When will we know when we have arrived at the future of the web? I like to think it's when we reach Arthur C. Clark's third law of prediction:

Any sufficiently advanced technology is indistinguishable from magic.

I only took on a single point of what I believe the future of the web will be about. I also feel that Data Portability, OpenID and the Social Graph will be interesting areas to watch. Users should not have to maintain multiple versions of their data, identity and connections on different websites.

I'm also pretty excited about where mobile location-aware services are headed. Wouldn't you love to drive by a restaurant and immediately be notified of their 2 tacos deal? Okay, that's not a strong example but you catch my drift. Fifty percent of Nokia phones will have GPS by 2010, 100 percent of Apple phones will have GPS by July 11th, 2008, and so on. The potential is there.

What do you think the future of the web holds?