One of my secret passions in recent years has been learning about startups - how they run, what they need, how they reach their audience, the value-prop they offer and so on. Some people have a thing for GTD but I have a crush on startups. Why do I love them so? Take for example Markus Frind, the founder of the dating site Plenty of Fish. He is the sole employee of the company and single-handedly created one of the most trafficked sites in its league, pulling in over 10 million pageviews and 300,000 per month. That's nothing short of incredible. 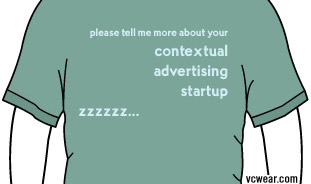 Other than reading about amazing startup stories, I enjoy finding out about running a startup and how other startups orchestrate themselves. Paul Graham's essays are a great place to start if you're in the same boat, as well as his Hacker News (née Startup News) website.

Aside from being a passion, startups for me are an unavoidable part of the tech scene. Some of the most innovative products come from some folks living in the same tiny apartment churning out code. I figure I better pickup on startups now and hone my currently lacking business running experience with Skribit. I don't know what the future holds but I think I would rather work for a startup where I can make a large impact on the entire company compared to working for a massive Internet company and have little say in product development much less direction. I would rather be on a team of 3 that changed X or reinvented the way people use Y, or maybe even made Z obsolete than hidden away under the corporate umbrella of some Internet giant.

There are many startup skeptics out there that would never consider starting their own company or working for an already established startup. The obvious reasons deal with the relative lack of job security. Your idea could end up not having the prospective market you once envisioned. Another reason/excuse people avoid working for startups - Google or another innovative startup is probably already doing what you're doing. That reason doesn't hold but I'll leave that for later.

Bootstrapping is a b!tch. Starting a company needs capital. You're going to need money to buy ramen while you grow your idea, and so are your co-founders. I'm not saying you need to immediately look for funding, in fact I'm saying quite the opposite and side with Fried et al (at least you don't really need funding initially).

Opportunity cost will bite you. You might lose sleep when thinking about how you could have been making bank at a large, established company instead of working for a startup that doesn't make any profit for a year.

Reasons why I disagree with those people

Startups are all about risk and rewards. You can take the blue pill and stay in a stagnant corporate job with a bit of career advancement headroom. Or you can take the red pill where your contributions are markedly more visible and you have more control over the direction of an entire startup. Risk also includes competition. Competition will always be present so there's no reason to avoid the startup life just because of that. Competition is great for product development. It gives you a way of seeing what the market wants based on the competitor's offerings and their success and thus enhancing your product.

Likewise, opportunity cost affects every decision you make. What would have happened if I went to a different college? If I had been a PC user all my life? If I never started a blog? In terms of startups, thinking about opportunity cost is hard to avoid but it usually comes down to your passion to change something and taking a risk to reap the rewards. When/if I start working for startup full-time, I know I'll have to face dealing with a paltry income initially while my recent graduate friends take up 100k+ jobs at law firms and consulting agencies. My response to them is usually something along the lines of at least I enjoy what I do.

Should you do a startup?

I've thrown around the word passion quite a bit in this article. To me, startups are all about following your passion. If you have a great idea and really think it could work, why not give it a shot regardless of the risks? You'll end up meeting many influential people from trying to push your product out there as well as seeking investment.

For those of you that have only recently started reading this website, one of my "extracurriculars" is the web startup Skribit. It's a service that lets bloggers cure writer's block by opening a conversation with their readers by allowing readers to provide article suggestions, among other things I'll leave for a separate article (we have some features coming soon). Skribit is by no means just my startup. There are a lot of people involved with Skribit (Calvin, Jason, Lance, Alan, Rob, Mike and quite a few more).

The hardest thing, even harder than the business plan, is hiring - finding people that will make a great addition to your startup that are in it for the same reasons. If you're in it for the passion and have dreams of building a great community around your product, you probably won't get along with someone that's only in it for the money. People purely in it for the money will only develop ways to milk the cow but they won't always work since they were not built with the market and end-user in mind. However, some compromise is unavoidably necessary as you need to have product direction and make money in the process.. just make sure you have enough passion people to keep the suits in check.

What about direction? It's easier to run a company if you know where you want to take it. This includes laying out a product plan early on - potential avenues to explore as you iterate through product development and see what works and what doesn't. As the product makes its first steps into the spotlight, you'll realize which features are safe to explore based on how people use your product and the feedback you receive. Keep the direction of your startup easily accessible to all employees/co-founders so they stay on the same page.

I'm going to close with Paul Graham's stance on making new things - something you might consider taking to heart with your next venture:

I like to find (a) simple solutions (b) to overlooked problems (c) that actually need to be solved, and (d) deliver them as informally as possible, (e) starting with a very crude version 1, then (f) iterating rapidly.

Startups: yes or no?

Disclaimer: You realize I'm only 21 right? Think twice before taking business advice from me.