Over the past decade computers have become progressively faster and faster at an astonishing rate. However, one main bottleneck always remained - the hard drive. While hard drive technology advancements such as perpendicular magnetic recording are giving 7200RPM drives performance on par with that of regular 10,000RPM drives, SSDs offer even greater improvements. 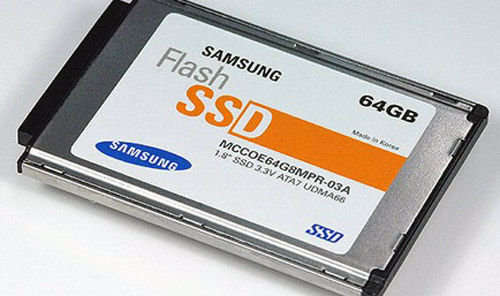 Solid State Drives have started being offered in new computers and we will be seeing an increasing trend as they come down to a reasonable price (Newegg.com lists a 128GB SSD at 3,800 at the moment). But I'll tell you why I want one now.

SSDs are composed of non-volatile (data remains when there's no power) NAND flash memory and are considerably faster in general when compared to their spindled counterparts. I say in general because SSDs have slower random write speeds due to technical implications of the memory. In addition to being faster than disk drives overall, SSDs benefit from less power consumption, incredible seek/access times (like 0.2 msec for random access compared to ~8ms + latency for a typical 7.2kRPM drive), no time needed for "spin up", lower heat output and are silent and more rugged from no moving parts.

Here's where I and other mobile users would benefit from SSDs: longer battery life and less heat production. More importantly though, your data is safe should you ever drop your laptop. Yeah, you might break the actual computer or crack the motherboard, but need not worry as your precious data is still safe. So far SSDs are sounding just about perfect with the exception of cost.

Unfortunately like all NAND memory, SSDs have limited write cycles. Higher-end NAND that might be found in current SSDs could perform well up to about 1 million writes, after which your data won't be safe and random memory blocks may just stop responding to write requests. This may mean that the SSD will only last a year for the power user and no more than 3 for the average user. Don't quote me on that though; it's pure speculation based on personal experience with other flash devices and an electrical engineering course I took 3 years ago. Edit: It appears that SSD manufacturers like Adtron are offering 3 year warranties - perhaps a testament to the improvements in modern flash chips?

However, drive lifetime depends heavily on the type of SSD and usage cases, but you get the point. There's a high early adopter risk with SSDs. Regardless, if I found a place that sold Samsung's 64GB SSD (they seem to be only OEM at the moment), not much would be stopping me from buying it, even if it was 1k and even though I don't have 1k.

Samsung recently announced a 1.8-inch SSD boasting sequential write speeds of 100MB/s and read speeds of 120MB/s - that is the definition of stupid fast.

What's better than an SSD? Two. In RAID 0. In your MacBook Pro with the optical drive removed.

To SSD or not to SSD, that is the question.

"The Future of Computing: SSD" by @Stammy