Over the last few weeks I have talked about applications and services that enhance iTunes, such as Qloud's tagging plugin and Soundflavor's iTunes add-on. Get ready to welcome one more application to this group, Tangerine. Tangerine is most similar to Soundflavor in that it can create playlists for you by analyzing the songs in your iTunes library. The main difference being that Tangerine is launching with a Mac version and will remain Mac only.

We came up with the idea after I noticed that I was spending a good 30 minutes to come up with about 30 tracks for working out. I would repeat the process fairly often and I was getting tired of it and tired of listening to the same songs over and over again. So we developed Tangerine to automate that process. The app should pay for itself for some people. It should be really handy for Nike+ users and if youâ€™re not, this app may motivate you to get one because thereâ€™s nothing like running to the beat of the music to keep you motivated. 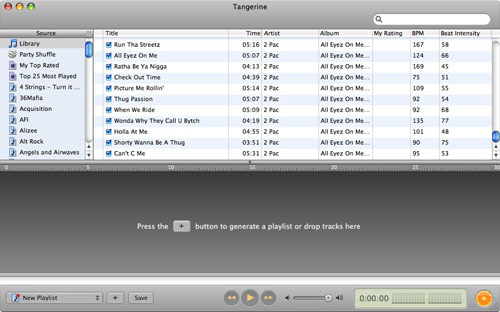 From the few minutes I have played with Tangerine, I can say outright that the interface is impeccable. Tangerine has a fantastic icon and a clean iTunes-like experience. It immediately displays your iTunes playlists and allows you to browse through your library. When generating a new playlist, the bottom portion of the interface shows you each song as graphed according to length and BPM, making it easy to grasp what kind of playlist you are building.

Tangerine is beta software and that explains why it was sometimes hard to get a song to play even when clicking it multiple times. Also, the little "LCD" area gives you no indication of what song is playing which can get rather confusing when you are listening to a song and clicking around through your library. I did, however, like the feature of the graph area which lets you resize the graph as I'm calling it. It's hard to explain but it's the same slider found in iPhoto. 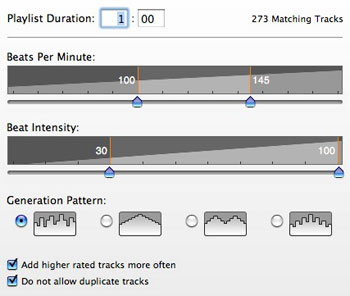 All in all I was wholeheartedly impressed with Tangerine - something I had only heard about until very recently. To me, an application's first impression, graphics, and design are as important as functionality, usability and features. Tangerine excels in both areas with a pristine user interface and a progressing feature-set. I can't say which I like better at this point as Soundflavor has yet to produce a Mac version of their client and it serves a slightly different purpose/exudes a different feature-set. Download Tangerine for yourself over at the Potion Factory blog. What do you think of Tangerine?