A few months ago I wrote an article about ideas, ones that can grow into big things. I received overwhelming response from readers in the same boat as me - tons of ideas and no clue where to go next. Today I shall propose the next step: applying for a provisional patent.

Is it for you?

is a type of national application for patent filed in the United States Patent and Trademark Office (USPTO), but which does not mature into an issued patent unless further steps are taken by the applicant.

The key point there being that a provisional patent may not become a real issued patent until you are able to create a working prototype, as exemplified by this part in the provisional application Wikipedia page:

One popular use of a provisional application is to document and "lock in" potential patent rights while attempting to obtain sponsors for further development (and for more expensive patent applications). This tactic may permit an inventor to defer major patent application costs until the commercial viability (or futility) of the invention becomes apparent.

A provisional patent will help protect your idea for 12 months, while you work on developing it. It is particularly helpful in the case that another inventor attempts to patent a similar/identical invention and your filing date is before the other guy's. However, patents (provisional and non-provisional) are not for you if your idea isn't an invention or something new. If you have an idea to create a better Facebook, you can't patent that since it has already been done regardless of whether or not you think you can do a better job. However, if you have a particular, unique feature that hasn't been done before, that might be worth looking into.

If you're not sure whether your idea is patentable and already done, you'll want to hire an lawyer or service to perform a patent search for you.

Last week I attended a meetup of the Atlanta Web Entrepreneurs, where I learned about copyright and intellectual property law, among other things. A speaker there had mentioned a website called LegalZoom that makes it easy to apply for provisional patents, register a company, trademark and other similar legal tasks. I will admit that the site looks and sounds cheesy, but apparently it works well.

I went through the process of applying for a provisional patent for one of my ideas and it only took about 10 minutes. 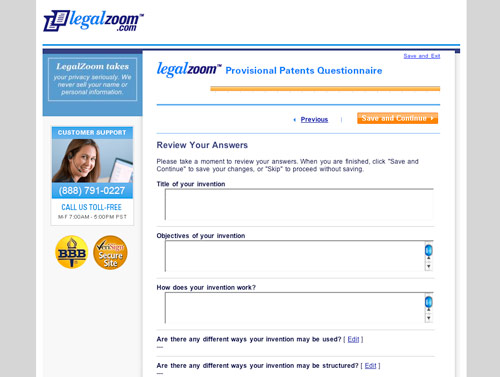 Fields blanked out for obvious reasons.

Then I got to the part where I needed to pay 299 (199 for provisional patent, 100 for government filing), so I'll leave this for another time when my pockets aren't empty. I just wanted to point out that taking the next step and protecting your idea while you develop it doesn't have to be expensive. LegalZoom offers a great service when compared to what it would cost through a lawyer (2,000+). However, LegalZoom offers the option to have a lawyer look over your application at an additional fee; an option I would highly recommend.

If you have ever gone through the provisional/non-provisional patent application process, I'd love to hear about your experience so please leave a comment.

Disclosure: I am not a lawyer (IANAL).