As the price per GB of SSDs has decreased steadily since I bought my first 700 80GB SSD in 2008, more and more questions have been emerging about wear leveling, TRIM concerns and SSD performance degradation from new and prospective SSD purchasers. These concerns are becoming more prevalent as mainstream laptops are more often coming out with SSDs as standard — take the new MacBook Air as an example1. Today I just wanted to post a brief update about how my particular SSD setup has been doing just about 9 months after I wrote about the process: How To: Apple MacBook Pro RAID 0 Array with 2 Intel X25-M SSDs.

I'll keep this short. The dual X25-M SSDs are not as fast as they were on day 1. When the RAID 0 array was brand new I was seeing average reads (for 1MB+ benchmarks) of 520 MB/second and average writes of around 170 MB/s. Now those numbers are more like 460 MB/second for reads and 150 MB/sec for writes. Don't get me wrong — still very fast but it definitely looks like they have been put through their paces, especially usually with just 10 GB of free space, and have taken a performance hit. The X25-M's controller is smart and controls write amplification with a DRAM buffer so that the drive will reduce NAND flash write operations until most efficient — waiting until the minimum block size is ready to be written rather than write a whole 128KB for just 4KB of real data. But that can only help so much.

In particular, it appears different parts of the array (which could mean certain parts on one physical drive or the other are more worn out) have heavily varying performance. It only starts to normalize with larger file size benchmarks. The peak performance is still lacking from when the array was new. 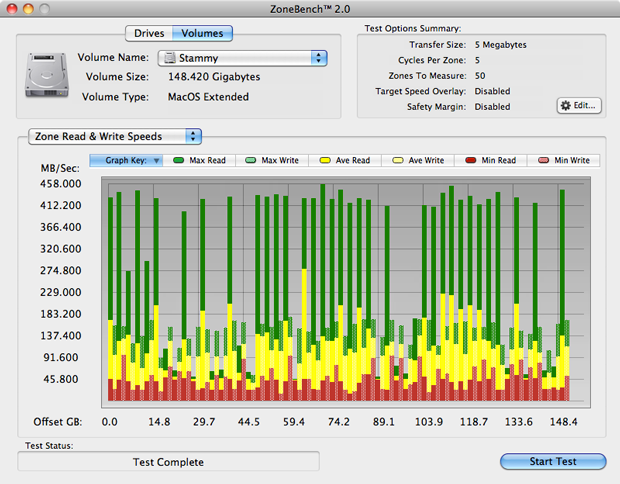 Performance not as uniform as would be expected for this benchmark (ZoneBench: 5MB cycled across 50 (max) zones 5 times)

Just something to keep in mind when you upgrade to a new SSD setup. I would not trust the drive/array for 5 years (MTBF). I already backup a lot considering the controller on my first SSD (an original X25-M G1; ones used in this array are G2s) died after 9 months of usage. In the case of the new MacBook Air, getting AppleCare might actually be worth it so that you can have Apple replace the SSD in a few years after it starts acting up or dies.

And it goes without saying: each few months a better SSD with a smarter controller comes out that will last longer and carryout native TRIM functionality with a supported OS (not OS X), so they will last much longer. If you're looking at an SSD today I would probably suggest the Crucial C300.

Thoughts? What's your main machine and does it have an SSD in it?

(I have reached out to an SSD expert to get his thoughts on this.)

Footnotes 1 I rather dislike when many tech journalists claimed the new MacBook Air was ridiculously fast.. when they compared it to a hard drive toting MacBook Pro. At least compare it to an SSD-equipped MBP! It's rather obvious the Air is going to be the first SSD-equipped computer many consumers ever touch.