While many illegal music downloaders and file-sharers have been pursued by the RIAA, most have settled outside of court. This past week, the RIAA dealt with the first real trial where someone fought back and denied any wrongdoing. While I have heard of others fighting back against the RIAA, this is the first such trial involving an individual downloader against the RIAA. Regardless, that someone illegally shared 1,702 songs - 24 of which she was found accountable for. Multiply 24 by 9,250 and that's quite a hefty fee to pay. Songs were downloaded and shared via Kazaa, making it easy for prosecutors to track her account name. Here's my question - people still use Kazaa? 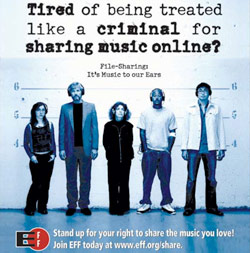 One of the reasons for demanding the 30 year old woman pay such a high fee dealt with setting an example for other illegal downloaders. Isn't that always the excuse though? I don't think it has helped much thus far, with the number of active file-sharers growing since the RIAA actively started issuing subpoenas. Past RIAA cases (26,000 subpeonas have been filed to date) have covered issues such as whether an IP address can be used to identify a person (it can't). RIAA subpeonas hit close to home for me, having had close friends pursued by the RIAA and eventually settling for 3-4k outside of court. At one point, we had come up with an idea to pay for the legal expenses - selling t-shirts with "Never Forget [IP]" written on them, but that never came to fruition.

With a good portion of RIAA subpeonas aimed at universities, many schools have instituted free or cheap legal music downloading services. For example, Georgia Tech has Ruckus but it is a Windows-only program due to the type of DRM utilized and songs cease playing once you graduate or are no longer a student (last I checked). I applaud universities for the initiative but that's just not going to cut it. As such, several of my cryptographer friends spend much of their time stripping DRM from such songs.

As for me, I think that's all too much trouble and prefer the one-click buy method of obtaining music, especially now with Amazon's DRM-free MP3 store (although, now that I've been using it for a week I'm finding it lacks a lot of music that iTunes has).