Last September Yahoo! announced they had acquired Zimbra, a leader in email and collaboration software focused towards businesses, ISPs and universities. It was with that same announcement that Yahoo! said Georgia Tech would be one of the first universities to adopt Zimbra's webmail application. Georgia Tech's Zimbra migration is set to take most of this semester but students may opt-in at their own will to start running it early. Naturally, I'm one of those students and will take you on a brief tour of Zimbra.

Note: You can click on images for a larger view. Most images are hi-res (200kB+) so they could take a while to load.

Zimbra webmail is the most advanced webmail application I have used, and I have used .Mac webmail, the new Yahoo! Mail, Google Apps/GMail, RoundCube, @Mail and probably a few others. Just because it is the most advanced doesn't mean it's the best. As I've learned with GMail, sometimes you just need enough to get by and be clutter-free. Logging into Zimbra for the first time is like loading a full-fledged desktop application. It's responsive and has most features you would expect to find in a desktop application and a few nice surprises here and there. 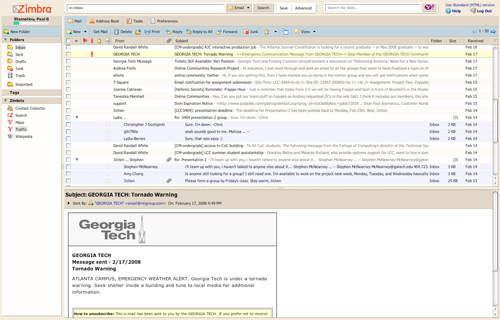 One of those nice surprises is Zimbra's (also known as Zimbra Collaboration Suite or ZCS) amazing search functionality. GMail lets you search with the following fields: From, To, Subject, Date, Has the words, Doesn't have, has attachment, and which folder/labels to search within. Zimbra webmail eclipses GMail's search with, well, a lot more search parameters. For example, with add-on Zimlets you can perform smart searches such as searching for a package tracking number: 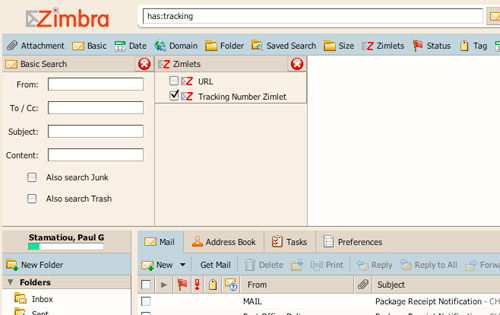 You can even search for even the most obscure email with dozens of advanced search fields.

Zimbra also has things you would come to expect from an enterprise-class webmail application like an address book, task list and the ability to add in LDAP/GAL directory servers. For example, Georgia Tech has setup a student/faculty LDAP server for autocompletion when typing out email addresses. 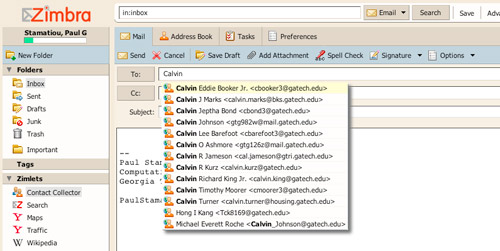 Various parts of Zimbra webmail make use of the "lightbox" effect with draggable floating modules as shown in this add attachments dialog. 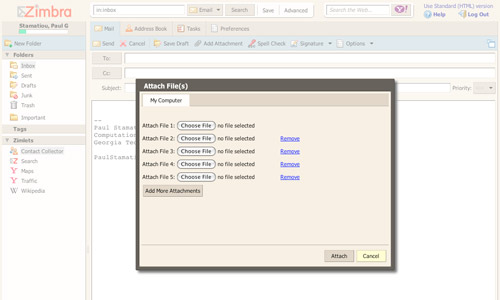 Similar to how GMail lets you import email from other accounts, Zimbra lets you add external accounts. That means you can use any email account with Zimbra even if it is just setup with one, such as with Georgia Tech students. 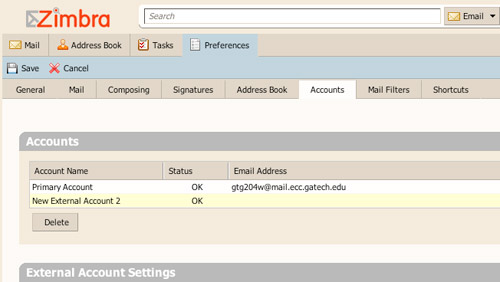 There's a nifty iPhone interface too. 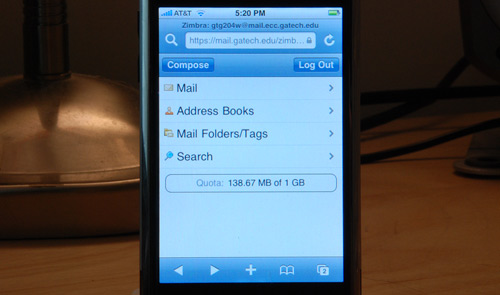 Zimlets are a "mechanism for integrating the Zimbra Collaboration Suite (ZCS) with third party information systems and content as well as creating "mash-up" user interfaces within the Zimbra suite itself." Any developer can create little Zimlets to add functionality to the Zimbra Collaboration Suite but if you're not a Zimbra administrator and are just using a hosted account such as with Georgia Tech students, you're stuck with the pre-installed Zimlets. Unfortunately, I can't get any of those Zimlets to work. I think it's just a Georgia Tech issue as the campus-wide migration isn't done yet.

The Zimbra Collaboration Suite lets you add as many feeds as you'd like. Through experience, it's good for keeping tabs on a few feeds but not much else. It's not built to be an RSS aggregator and lacks many of the fundamental features that news junkies can't live without in Google Reader. 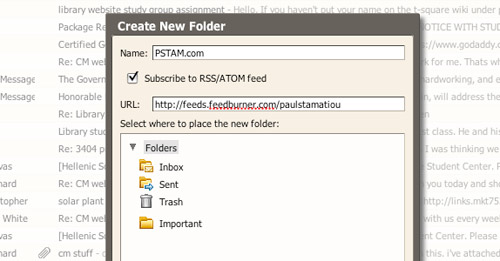 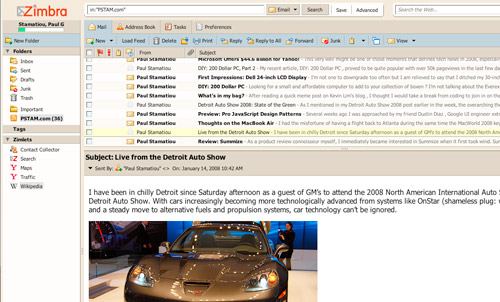 So you want Zimbra, now what?

Fortunately there is an Open Source Edition of Zimbra Collaboration Suite for you to download and install for free. However, the Open Source Edition doesn't have all of the features of the paid editions, such as Zimbra Mobile,.. which kind of defeats the point of open source software. Alternatively, you may opt to pay a Zimbra Hosting Provider to do all the dirty work for you and set you up with Zimbra. Or you can apply to Georgia Tech and get ZCS for free, not including 25k+ a year tuition if you're out of state.

The Zimbra Collaboration Suite does a lot. You'll have to decide for yourself if you prefer using webmail that just does email, or webmail that is more of a PIM and Outlook/Thunderbird/Apple Mail replacement. I usually tend to side with the notion that less is better and from that point of view it seems Zimbra takes some of the focus away from email and puts it on the other features of the interface. For comparison, when you log into GMail most of what you see is your email. With Zimbra, you see your email and a billion little icons for various functions.

Maybe I'm approaching this from the wrong angle and ZCS is meant to be a desktop replacement web app from the ground up. In that case, spot on job Zimbra. If I had to choose between the cutting-edge Zimbra Collaboration Suite and the needs-a-revamp-since-it-hasn't-really-been-touched-since-2004 GMail, I would pick GMail. Zimbra's font for the email list is a bit too small and overall I deem the interface too have a tad bit too much visual clutter. I mean, why do I need two search bars - one for email/web/etc and one for Yahoo? I know it has something to do with Yahoo! now owning Zimbra, but what's the point to users when one search box can do everything?

Hopefully ZCS is a strong indicator of where web applications are headed in the near future. There's a tremendous amount of promise with what Zimbra has been able to accomplish in ZCS.

Verdict: Pretty sweet, but not for me. ZCS is a plush CLS63 Benz but I'd rather have a stripped-down Corvette with two turbos, a roll cage and a tank of Sunoco 116.

Do you like the Zimbra Collaboration Suite or do you prefer simpler web apps?