Two years ago during a trip to San Francisco I met up with entrepreneur Steli Efti. He had previously contacted me and told me a bit about his story. He bought a one-way ticket from Greece to San Francisco with the intent of creating a startup called Supercool School. Steli wanted to change the way people learn. I remember talking with him then and noting how remarkably passionate he was about the idea of giving anyone the ability to teach or attend an online class about any subject. I thought to myself about how this type of passion is what startups are really about. 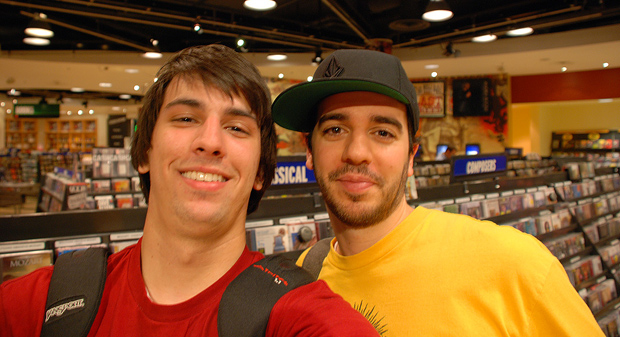 A high school dropout and self-taught entrepreneur himself, Steli believes education should be free and limitless — making the web an ideal platform for this. Supercool School classes will always be free for anyone, including children in third world countries (which explains why he's a fan of the OLPC). He stated in an interview that Supercool School will "spend 30% of our annual net profit on educational opportunities for children in third world countries." I believe this qualifies as the type of swinging for the fences and world changing that Sarah Lacy had in mind when she wrapped up her TechCrunch 50 coverage:

I did interviews with most of the TechCrunch50 experts backstage and there was a common gripe about the companies launching there: Not enough passion, not enough swinging for the fences, not enough trying to change the world. There were too many people building safe businesses, too many companies just trying to make existing things slightly better, and too many people wanting to be the next Mint.com, not the next Google.

Fast-forward to 2009 and Steli is still crunching away on Supercool School, along with some help. They worked on several iterations, at one point based around a Facebook application, before settling on their current website, which makes use of Adobe Acrobat Connect Pro to host the online classrooms, alongside their own software for the rest of the service. Supercool School is currently in private beta, and I have been tinkering around with their Startup School portion of the site. I became so intrigued with the classes I've taken or watched that I had to write about my experience.

It all starts with a request. Someone submits an idea for a class and specifies what they would like to learn or teach. The class request is then listed throughout the website, allowing anyone to join. When a request fills up, the site allows someone to come on-board as the teacher of that class. Users can browse classes — scheduled, recorded or requested — on the site.

That teacher can then set a date and time for the class. When class time rolls around, the teacher and students join an online, live interactive classroom of sorts. Anyone can share their audio and video, text chat, use a whiteboard and follow along with presentation slides. However, there's no need to worry if a few people can't attend the class; each class is recorded and archived for future playback at anytime by anyone.

I took Supercool School for a test drive last month and attended a "Founders Interview" class, which is a series devoted to interviewing successful startup founders. This particular one was hosted by UserVoice co-founder Marcus Nelson. He talked about everything from the very beginning of the company to some of their marketing and sales tactics. Throughout the entire interview, users asked him questions via chat and audio. All in all, I was pleasantly surprised how relevant much of the information was to me and I started taking notes of my own (PDF), which I then shared with the class via EtherPad. 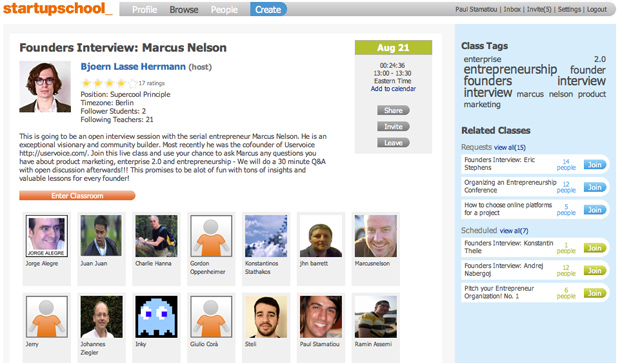 While there is a distinct teacher role in Supercool School classes, everyone is essentially treated as an equal and given the opportunity to speak their mind and ask/answer questions as they please. While this could lead to wildly irrelvant classes and unruly behavior, I haven't seen that from the classes I have attended or watched. People are spending their own time to join the class, so generally everyone brings something to the proverbial table. 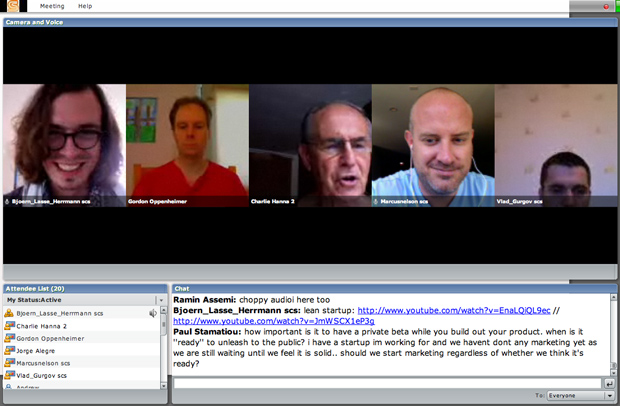 Live online class - anyone can share their audio/video and chime in.

The particular class I participated in had a few technical issues. For example the teacher's microphone continually stopped working and he had to exit and re-enter the classroom and tinker around with settings. Other times the video and audio would be choppy, despite having a solid connection to the site. The classroom's fit and finish is typical of a generic Adobe-created Flash product and not the sleekest out there, but it gets the job done. 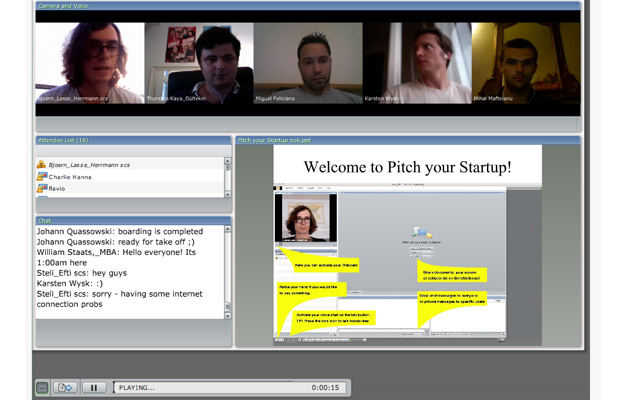 Playing back a pre-recorded class.

One interesting class series is called "Pitch Your Startup" and encourages people to come and share their slides and talk about their projects. Other classes cover topics like iPhone development, using Google Adwords, marketing through Facebook as well as funding strategies. Throughout this blog post I was talking about the Startup School section of Supercool School, thus everything is startup related. I am not sure if there are any other sections live but there will surely be many more sections and curriculum genres up once Supercool School officially launches.

Bringing the classroom online is not a new concept by any means, but everyone that attempts it has their own way of getting the job done. Some such solutions aggregate content by subject matter and open up the site for users to comment on and add to, but this does little to engage users and establish a strong sense of interactivity or community. Supercool School takes the more literal sense of the classroom and brings it online.

Do you think Supercool School's method of online education works? It might be too early to tell and I'll have to see what kind of reaction other curriculums receive, but I am definitely a fan.

Supercool School competitors include sites like eduFire that charge money to attend classes, so how will Supercool School survive if everything is free? While Steli hasn't given any hints as to the business model behind his startup, he said that they will not make money by "selling paid services, products or anything else that doesn’t bring additional value" to all members. That doesn't seem to leave much room for anything else, so I'll be keeping an eye on it.

Have you ever used any such online education/classroom sites before? Listened to one of those iTunesU podcasts? Can online education work or is there a real need for a physical classroom?

Leave a comment below (with a valid email address) and I'll try to hook you up with a beta invite if you're interested.