Disclosure: This is another one of those paid-reviews-trying-to-pay-off-tuition things. It's a rather well-known fact that Microsoft's attempts at integrating a top-notch firewall into their operating systems have come up short. If their integrated "firewall" was any good, they wouldn't have made it so easy to disable it to use a real firewall and would have kept with Microsoft monopoly tradition making it impossible to disable. One of the most popular firewall solutions for Windows has always been ZoneAlarm. 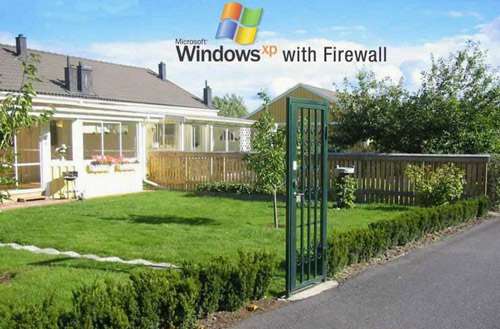 An accurate representation of the unsecure nature of the Windows firewall.

However, I'll be taking a look at a firewall that I haven't heard of until recently, Agnitum's Outpost Firewall Pro. Outpost is more than just a firewall, featuring innovative methods of preventing data theft whereby a malware application can utilize personal information from another application. Outpost Pro's data theft prevention is part of its privacy feature set aimed at curbing identity theft. That alone is rather captivating.

And even if malware finds its way onto the system, it won't be able to transfer any data out of the network because the ID block function lets you define and lock down blocks of text, preventing them from being removed from the machine by any electronic means â€” IM, web access or email correspondence.

One of the largest pet peeves of firewall software is the constant need to allow or deny certain connections to be made. After a while, most firewalls "learn" what connections are okay to make and tend to bug you less often with allow or deny requests. Outpost Pro gets around this by including predefined rules for known applications, in addition to something I really like, Entertainment mode.

Once you enter Entertainment mode, which can be automatically triggered once certain applications are launched, you can enjoy full-screen gaming or movie watching without being interrupted by Outpost. Over spring break I installed Counter-Strike: Source (an old but great FPS game) on my mom's computer, only to be annoyed to discover when I went full-screen the Windows firewall popped up and eventually froze CS:S. Entertainment mode is definitely a welcomed feature in Outpost Pro.

Outpost Pro is a complete security suite and includes an on-demand spyware scanner that can be run whenever you like, similar to Ad-Aware. However, I also found that the scanner ran in the background, detecting vulnerabilities on the fly. It (annoyingly) came up several times by itself when it discovered standard tracking cookies from MSN and similar sites. 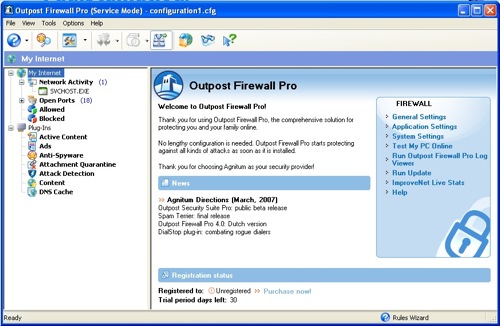 The interface is intuitive and designed as if it were part of Windows. I didn't spend time looking for certain settings and was able to go on with my regular tasks normally. I enjoyed looking at the section that displayed network activity and open ports used by applications in real-time. In the above screenshot you can see a portion of the left pane devoted to plug-ins. Outpost Pro is plug-in friendly and allows you to easily extend its security functionality.

For a company and product that I have never heard of, I was impressed with what Outpost Pro offered. Installation took just a minute and I had it running quickly. No post-install configuration was necessary at all; Outpost Pro has pre-set configurations for users. At a price of 39.95 including a year of updates and support, Outpost Pro is competitively priced for being an almost all-in-one security suite protecting you against spyware, data stealing malware, intrusion, malevolent email attachments and more. Outpost Pro is not an alternative to your anti-virus of choice, it's a complement. Outpost is not currently available for Vista but if you purchase a license your license will be automatically upgraded to a Vista-compatible version of Outpost Pro when it's released.

Personally, I don't use anti-virus or firewall software when I'm on a PC. I'm prefer the ignorance-is-bliss route, am always behind a firewalled router with NAT and practice common sense. However, I would recommend Outpost Pro to family members looking to secure their PC. That recommendation will also probably go over better than my "you don't need Norton, just use common sense" excuse .