It is not very often I find a software application that saves me time, doesn't require much work on my end and actually gets used often. GrabUp (free, or 20 paid account) is one of those applications that I value enough to purchase. The OS X-only application intercepts your screenshot command (Command+Shift+3 or 4, etc) and automatically uploads the captured screenshot to either grabup.com, or your own server via FTP (paid account), and provides you with the URL in your clipboard, ready to paste.

It gets interesting at 2:10

Forget about having to open up your FTP application or using an imagehost like ImageShack. GrabUp takes care of all the uploading in the background and rapidly at that.

Why do I find value in GrabUp? For one, I share screengrabs with others several times each day. From trying to describe a website bug to someone or showing a friend what I'm working on, GrabUp comes in handy. 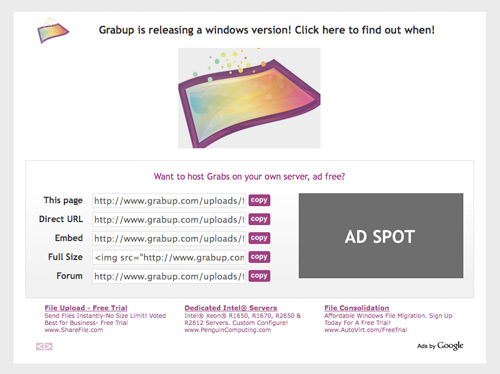 The free version of GrabUp uploads images to a site page this. 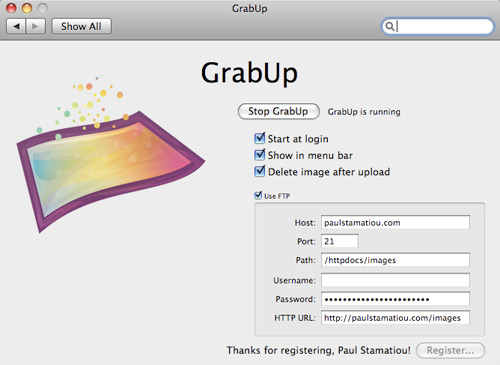 The paid account also has the neat little benefit of letting you watermark your images on the fly. This actually has nothing to do with GrabUp except that they supply you with a watermarking kit. The kit is comprised of a special .htaccess file, PHP file and your own watermark image that you place in the same directory on your server as GrabUp stores your images. Of course, this assumes your server has PHP and Apache at its disposal.

Here is an example of a watermarked screengrab created with the GrabUp-provided watermarking kit:

That's pretty much all there is to GrabUp. It's a lightweight, purpose-driven application that does one thing well. This is exactly why I use GrabUp over a much more capable application like Skitch. Skitch on the other hand has editing software that, in my opinion, is rather ugly and gets in my face. I haven't used Skitch in quite a while, so if things have changed please let me know in a comment below.

All I want is a screenshot uploaded in the background and GrabUp excels at that. PC users might be interested to hear that a Windows version of GrabUp is in the works. For another take on GrabUp, read Chris Lentz's review.

There are a few improvements I would like to see made to GrabUp. For one, I would like an option where GrabUp asks me to name the screengrab before it is uploaded. There are times when I would rather make a screengrab more public than having an obfuscated file name such as the current naming method below:

Other settings that would be nice include adjustable image compression (useful for larger screenshots) and SFTP server support.

Update: GrabUp does not currently work with OS X 10.6 Snow Leopard and it appears the developers have abandoned the project.