This past weekend I drove over to Birmingham, Alabama, for WordCamp Birmingham 2009. This was their second WordCamp and brought out some 180 people — three times larger than their first one last year. This was not my first WordCamp; I attended WordCamp San Francisco 2007. In a nutshell, WordCamp is a weekend event where WordPress users, enthusiasts, developers and other members of the community gather for a series of talks, sessions, Q&A's and networking. If you have a WordPress question, you'll find your answer at WordCamp.

A few months ago, Jeremy Flint contacted me to tell me about WordCamp Birmingham. A few weeks later, Skribit became a sponsor. The timing was just right as Skribit is now ready to start spreading the word. The Friday night before WordCamp Birmingham we deployed a homepage redesign, among other things, that I, Calvin and Alex have been working on for the last week. 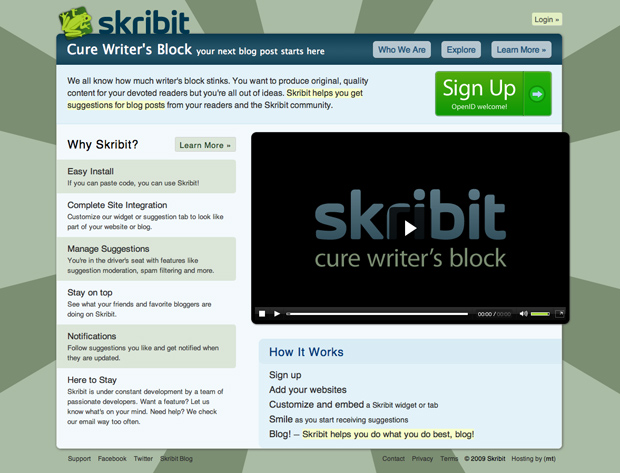 Skribit Homepage Redesign. Now with more pitch and some CSS3.

I handed out some high quality custom cut vinyl digital press StickerGiant.com-created Skribit stickers and talked Skribit to anyone and everyone. WordCamp Birmingham is Skribit's first 'marketing' move. We have not done any formal marketing otherwise. I figured the audience was just right and we decided to sponsor. We also built out a promo code system and created a discount for Pro paid accounts, using the same event hashtag for our promocode and spread it on Twitter a bit. 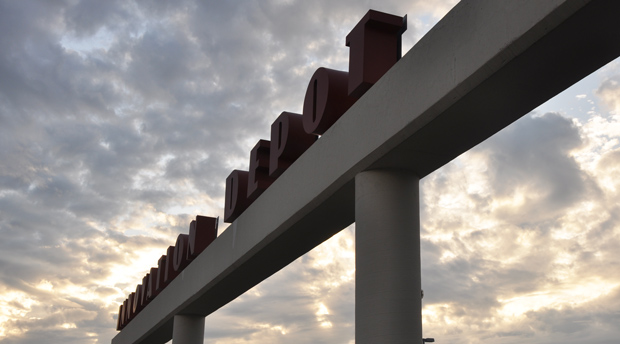 The two day event started out at an interesting and rather large venue called Innovation Depot — a technology business incubator in Birmingham. With the exception of keynote-style talks, there were two tracks people could attend. A regular/beginner track and an advanced track. I went to advanced track sessions and heard talks from Dougal Campbell, Jeremy Flint, Sara Cannon and Mitch Canter.

Dougal (one of the very first WordPress developers) talked about WordPress plugin development and covered the basics like filters, actions, hooks and events. At one point in his presentation he pointed out the WordPress Codex, which I agree is an amazing resource for anyone looking to do anything with WordPress. 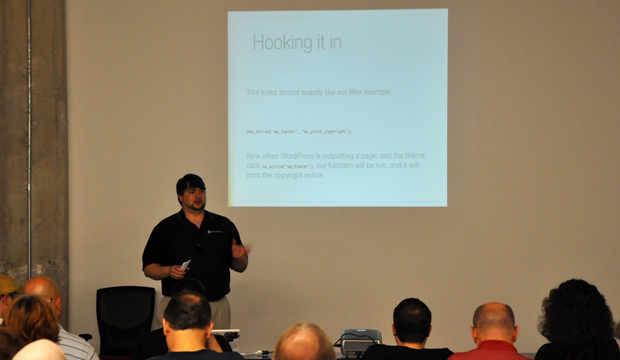 Sara Cannon's presentation was titled "WordPress and Your Brand" and she discussed finding a theme to fit your needs, designing for your brand as well as a sIFR how to. Personally I'm not the biggest fan of sIFR from a usability standpoint. It worked well when browsers weren't as robust, but with CSS3 supported by most popular browsers now, we will see a strong alternative in CSS3 @font-face (althought setup is still a little tricky right now). 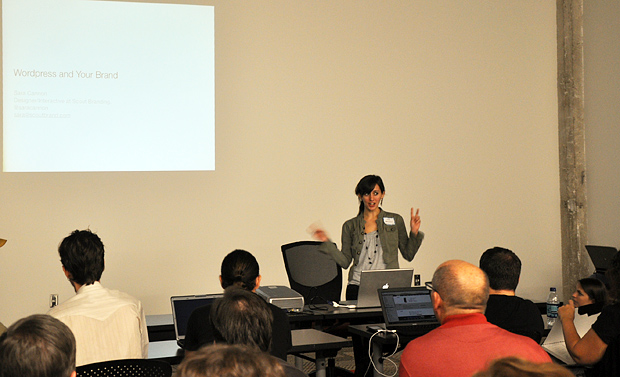 Jeremy Flint had an interesting piece on "Essential SEO and Analytics for WordPress" where he covered things like robots.txt, permalinks and keywords, as well as talking about popular SEO and Analytics plugins.

Jeremy Flint's session on Essential SEO and Analytics for WordPress

Matt ran a 'Town Hall' style keynote; essentially Q&A and it turned out quite well. People asked about what was going to be in WordPress 2.9, what was going to happen to WordPress MU and so on. I'll update this post and link to the video if I find it. However, the most interesting thing I learned over the weekend was during this Town Hall where Matt made a random comment about how you can easily add custom taxonomies. That is to say that you can set up your own specific tagging structures. Sure enough after poking around I realized it was truly as easy as Matt said — one line of code.

For example, setting up a taxonomy for People:

More info about custom taxonomies here or check out this popular plugin (Simple Taxonomies) if you don't want to touch any code.

I also sat in a talk by Mitch Canter about WordPress security which covered basics like not removing the "admin" user (I prefer keeping it but giving it the lowest role - foils spammers into thinking they "got in" - and moving all posts over to your new account), changing the default database prefix, database backup and file permissions. Members of the audience, like myself, brought up things like the Stealth Login plugin to change the wp-login.php/wp-admin paths, using SSL to access the WP-Admin with HTTPS, automated server backups to Amazon S3, and locking down Apache.

The last day of WordCamp was held at the lovely Shift Workspace. I was most interested with the "Genius Bar" idea they were implementing. Anyone that had a problem or needed help with something could pair up with an expert to get their issues resolved.

As for constructive criticism, there were a few issues with WordCamp Birmingham 2009 that I noticed and heard about from others. First off, someone apparently forgot to bring microphones for presenters, making particular people rather hard to hear. The projector(s) used were low contrast, low brightness, low resolution and tended to wash out many presentation slides/demos. Chairs were not exactly abundant so people had to move them from room to room during the event. The Wi-Fi that was hard to connect to (we were later told that some computer on the network was spreading a virus and using up lots of bandwidth; regardless, a single consumer router can't support 50+ clients in a room), and there was a general consensus among people I talked to that the advanced track was still rather basic. All that being said, I enjoyed the sessions I sat in on, and talking with other devout WordPressians. It's all about the community.

Ever been to a WordCamp or other such community-organized CMS event? If you were at WordCamp Birmingham, please leave a comment and let us know what you thought of it!