Macbook Air owners know what I'm talking about - the dreaded core shutdown. When the MacBook Air gets too hot, there is a built-in thermal shutdown feature that turns off one of the two cores in the Core 2 Duo Intel processor found in the MacBook Air. The problem is that one of the cores often shuts down at temperatures that shouldn't be worthy of a thermal shutdown. If you want to test this out, one easy way to get the MacBook Air to shutdown a core is to connect it to a larger external display and use it normally or watch some HD video. This stresses the GPU, which is on the same heatsink as the CPU, and initiates a core shutdown.

Core shutdown has become an inevitable part of using the MacBook Air as my primary machine, but I think I found a solution while Googling away in sheer core shutdown annoyance earlier today. Undervolting is apparently the answer. Using an application called CoolBook I was able to set some processor throttling settings with speed and voltages. 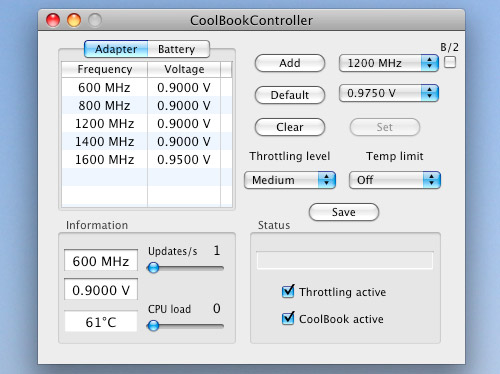 After I purchased a license for CoolBook so that I could change CPU speed and voltage, I created a few throttle points and rebooted. Undervolting essentially runs less juice through the CPU and combined with various processor frequencies you can set, the CPU produces less heat. This means no more core shutdown and longer battery life at almost no perceptible expense. Yeah, undervolting does mean the processor will be running slower but I set a throttle point of my full 1.6GHz for when it's needed. When it's not, such as when I'm simply web browsing, the CPU speed lowers.

However, I have noticed that when using CoolBook the MacBook Air is allowed to get very hot (75+ deg C). Just keep an eye on your temps if you do anything extremely processor intensive. I use smcFanControl.

Rob Randtoul has the specifics for configuring CoolBook for the MacBook Air. It worked for me.

Do you have a MacBook Air? Have you had to deal with core shutdown? Core shutdown usually isn't a problem for me unless I am connected to my 24-inch monitor or watching HD video on the internal display.