OpenDNS, the only DNS service I trust with my Internet experience, recently rolled out several notable features including from domain tagging (also known as "People-Powered Security") and an idea bank. The former lets OpenDNS users categorize domains by content and eventually, accurate domain categorizations make their way into the OpenDNS system. At that point, OpenDNS users and system administrators using OpenDNS can more accurately control the types of websites their users visit without resorting to using expensive web content filtering software.

Domain tagging definitely has its merits for the sysadmin crowd, but this post is about a feature you're more likely to use if you're a casual OpenDNS user. The Idea Bank lets users submit ideas to expand and enhance any aspect of OpenDNS. I hate to use this phrasing but it's like Digg for submitting ideas that OpenDNS may actually work on if enough users agree. 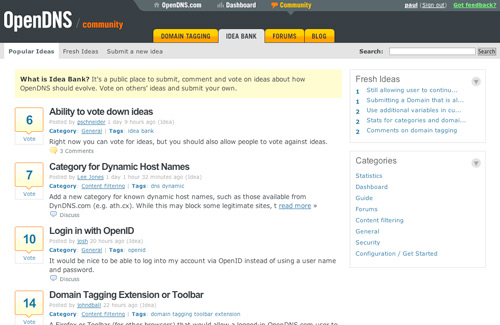 The only hard part about using Idea Bank is coming up with an idea to improve OpenDNS. I've been quite happy with it ever since I became a user in July 2006.

Do you use OpenDNS? I use it primarily for the speed compared to my ISP's DNS, but other things like tracking usage stats with nice graphs is always a plus.

Disclosure: I am a good friend of David Ulevitch and OpenDNS.