The next episode in the Notifo saga begins today. My co-founder Chad put the finishing touches on the first public release of the Notifo Android app beta. Installation details can be found on the Android page. We're obviously excited about this release. Android users are one vocal crowd and have been demanding this app for months! 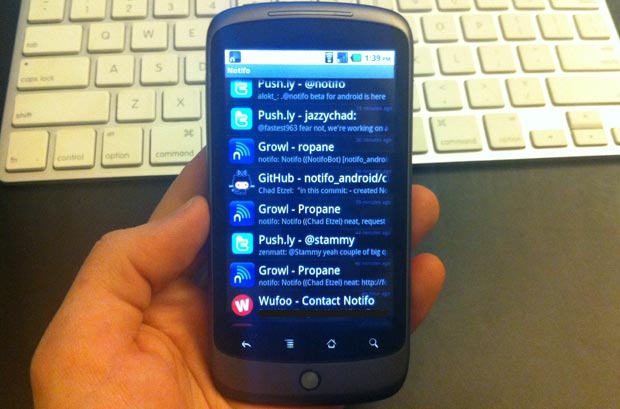 Notifo for Android running on my old T-Mobile Nexus One.

Taking a step back, I'll go over some of the details. This app makes use of Google's push service dubbed Cloud to Device Messaging (C2DM), which was unveiled not too long ago at Google I/O 2010 and first included in Android OS 2.2 / Froyo. That being said, this version only currently works with 2.2 or higher, until we build in support for older, non-C2DM OS versions.

Take Notifo for Android for a test drive and let us know what you think. It's really fast. For more background on what Notifo is all about, feel free to meander through my previous posts: