I must say, I am getting more and more intrigued by current tablet offerings. I do not own a tablet device, nor have I found the need to own one in the last year when iPad mayhem took the world by storm [sic]. I generally find them a bit awkward to use and have yet to see any truly brilliant apps take advantage of the unique tablet affordances.

I think it's odd that something like the HTC EVO 4G phone comes with a built-in kickstand but much larger tablets that actually need stands to use properly don't. I have taken at least 4 flights in the last year where I happened to be sitting right next to someone trying to prop up an iPad for 5 hours to watch a movie hands-free, but I digress. 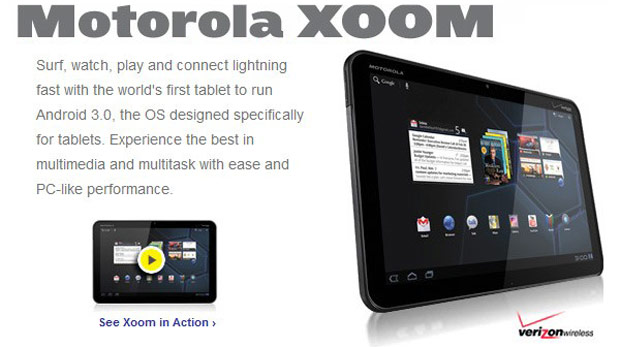 Apple will unleash the iPad 2 on March 2nd while Motorola will release their Android 3.0 Honeycomb-powered 10.1-inch tablet tomorrow. While there are no locked-down details about the iPad 2, other than the typical lighter, slimmer, faster and more cameras rumors, the Xoom specs are out in the wild:

But in the long run, hardware isn't the big issue for me. It's the software and development platform. After the recent ruckus over Apple's App Store updates regarding in-app purchases and subscriptions, I am getting more and more drawn to Android. Here's to the next 6 months and waiting to see some interesting Honeycomb, tablet-optimized apps emerge.