Microsoft is the first major player to announce a surface computing computer. The device is dubbed simply Microsoft Surface and is comprised of a 30-inch acrylic tabletop powered by a special Vista computer, 5 cameras and a DLP projector. Surface finally brings multi-touch technology, first exhibited by Jeff Han, to the masses. 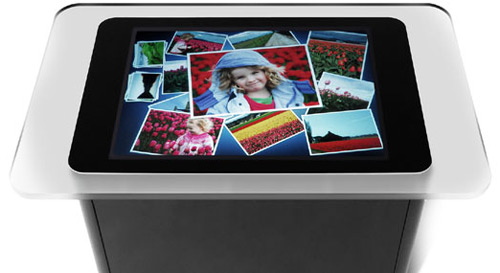 However, Surface goes even further than just simple visually tagged objects and can interact with devices like the Microsoft Zune and Wi-Fi cameras. A common example I have seen in several Surface videos involves someone taking a picture with a Wi-Fi camera, setting the camera on the Surface and having the picture appear immediately.

As you can tell from the description already, Surface facilitates a complete collaborative experience and as such is not marketed towards individuals; and even if it was, people would have to get over the 5,000 - 10,000 price tag. Expect to see it first with Microsoft's retail partners, casino resorts, hotels and such.

It's great to finally see a commercial product like the Surface, especially after having explored multi-touch and tangible computing in my interaction design class last year. Unfortunately, it seems like multi-touch computing is a long way out from making an entrance into the home and replacing the traditional coffee table. But wouldn't that be cool?

I can't wait to see a Surface at a bar or lounge in the future (I turn 21 in a month, yes!). If you check out the videos below, you'll see how fun the Surface makes ordering drinks, splitting the bill, calculating tip and paying by simply placing your card on the tabletop. However, the cynics will call the Microsoft Surface a glorified tip calculator, I'm sure. I recall a time I went to a sushi bar with a ton of friends - we literally spent 20 minutes trying to figure out how to split the bill. If only the Surface had been there to split our bill...

Videos to watch: Popular Mechanics, Bill Gates on the Today Show, and on10.net.