Put this into perspective: it's 9pm on a Friday night and you're out in San Francisco at a bar when you get a text message, your friend tells you your server is down for whatever reason. Normally you would be hard-pressed to fix the issue while out on the town, until now. MediaTemple will be launching a hosting control panel for iPhone users. All you need to do is visit the account center with your iPhone and reboot the server or what have you. No other hosting company has done this, and with the rapid release of iPhone web apps, it's a natural expansion.

I don't have an iPhone at the moment so I can't test it out, but instead you can indulge in these fancy images. 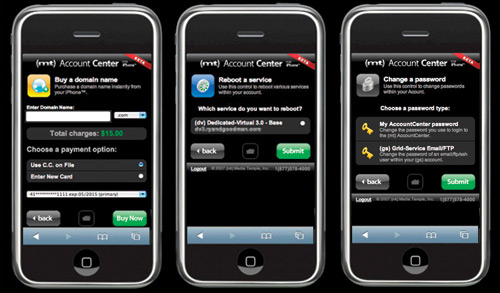 If your issue is larger than just rebooting a server, you can submit a support ticket via the iPhone account center. You can even buy a domain name if you think of the next big web app while eating dinner. I talked to Alex Capehart, MediaTemple's Marketing Director, about this at WordCamp and he made it sound extremely helpful to have access to my server's account center on the go.

Media Temple has been busy and they just rolled out a new, high-end server for uber-clients. The Nitro is like a (dv) dedicated virtual server with the exception that you are the only person on the server. You might be thinking, then why isn't it just called a (dp) dedicated physical server instead of a dedicated physical virtual. The way the (dpv) works is your environment is within a virtual private server so MediaTemple can move your setup to another server without any issues quickly, if the need arises. It also makes scaling from a regular (dv) to the (dpv) a breeze.

The Nitro has 4GB of RAM, 15k RPM SAS drives, a 4-core Xeon chip and more, with the ability to load balance between two Nitro boxes. It's a high-end solution for companies, massive sites or web developers that want to maintain many clients on their one machine. I'm on a mid-level (dv) 3.0 at the moment and don't see myself needing the Nitro anytime soon, especially with my slew of optimizations that require less resources and result in less bandwidth even with more traffic.

Disclosure: I'm a MediaTemple customer and am part of their VIP community partnership program.