Not even a week after they were released and reports are coming in that the Apple MacBook gets just as hot as its older brother, the MacBook Pro. Similarly, both have way too much thermal paste applied on the processor and northbridge chip. Take a look at this MacRumors forum thread. One MacBook reviewer stated that the heat led to a kernel panic. He was unable to get the MacBook to boot until after it had spent five minutes atop an air conditioner. However, what was more impressive was the photo found in this MacNN thread showing what the Apple service manual portrays is the proper amount of thermal grease. 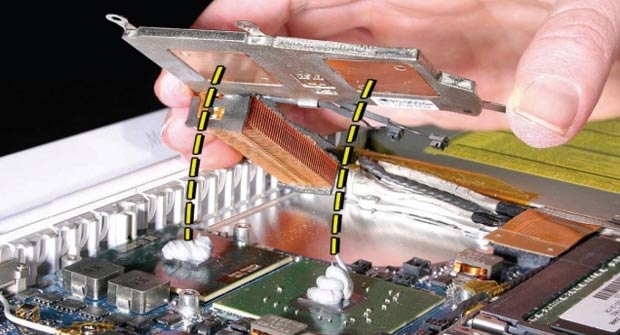 After seeing this picture, any computer enthusiast should be wondering what Apple was thinking.

For comparison, here is an image of my Core Duo processor (in a Mac Mini, not a MacBook) applied with a proper layer of thermal paste. Only a thin layer is necessary; anything more is overkill and can hinder the cooling properties of the heatsink. 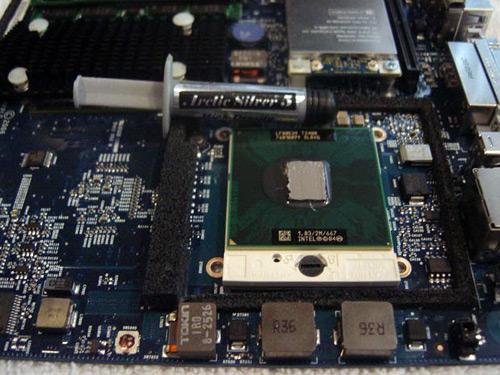 If you decide on purchasing a MacBook and are comfortable with voiding warranty, open it up and apply the proper amount of thermal grease. In addition to having the right amount of thermal grease, the right type such as Arctic Silver 5 or Ceramique can drop temperatures further. A cool processor is a happy processor and a happy processor has a longer lifespan. With this fix, you should be able to expect load temperatures to drop by 10 deg Celsius or more. Take a look at this extensive disassembly guide if you decide to reapply thermal paste.