I have been in chilly Detroit since Saturday afternoon as a guest of GM's to attend the 2008 North American International Auto Show, better known as just the Detroit Auto Show. With cars increasingly becoming more technologically advanced from systems like OnStar (shameless plug: whose headquarters I toured) and a steady move to alternative fuels and propulsion systems, car technology can't be ignored. 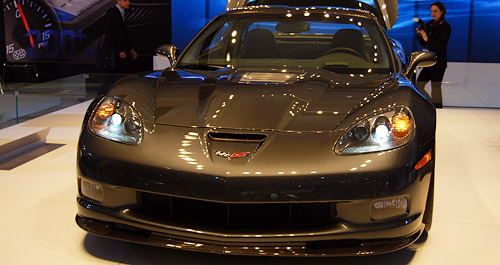 Cadillac's press event just wrapped up and I found a chance to boot up and connect to a WiFi network. Connectivity at this year's NAIAS has been quite an issue with networks always dropping but I plan on uploading hundreds of photos, a bit of video and coming back with a thorough highlights/wrap-up post. Let me know if you'd like me to snap a few shots of a particular car. Here are some pictures to hold you until then.

What's your favorite piece of current or upcoming car tech? The big thing at NAIAS 2008 is E85 Ethanol-friendly cars (even Ferrari has a bio fuel car) that can run both gasoline and ethanol, hybrid vehicles, fuel cell systems, electric-only vehicles and so on; pretty much all car manufacturers are moving towards the green it seems.

These pictures couldn't have been brought to you without the help of John Ratcliffe-Lee at MWW and others at Nikon for setting me up with a loaner Nikon D40x camera while my D80 was being repaired. Thanks!