A new service by the name of LinkedCampus is hoping to solve the modern problem of ineffective communication amongst campus dwellers. It has become quite clear that fliers and newspaper ads don't work anymore on college students during this digital age. LinkedCampus' solution utilizes cell phones and their relatively inexpensive text messaging abilities.

You're the head of a salsa dancing group on campus and need to let everyone in your group know that tonight's practice is canceled. The only problem is that it's twenty minutes before the practice and everyone is making their way out and won't be checking their email. You could a) call all 37 group members manually, b) text them all manually from your phone or c) use LinkedCampus to send a message to each member simultaneously. I think the choice is obvious.

In LinkedCampus, you can create "lists" or groups of peoples' phone numbers to contact separately. For example, if you were also an organizer for the campus Mac users group you could have a second list with the members' numbers. LinkedCampus can be used for multiple purposes but the bottom line is that you can get the word out about anything instantly and effortlessly. 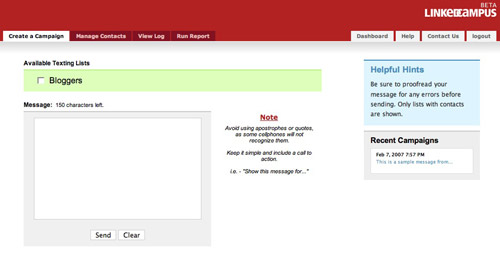 LinkedCampus provides a powerful solution, one generally aimed at local businesses trying to connect with college students, yet I find a few fundamental flaws. I'm not sure about others, but I only have a handful of my friends' phone numbers in my phone. I generally communicate using an instant messenger service and/or email, so harvesting phone numbers from everyone to use LinkedCampus would be a challenge in itself. Although, now that most people post their mobile phone number on services like Facebook, that isn't too daunting a challenge.

Speaking of phone numbers, for each list you only add the phone numbers of contacts - not their names or anything else. This makes it increasingly difficult to keep track of who is in what list and even harder to search for people. Currently, the only search mechanism goes by phone number.

Regardless, the people that developed LinkedCampus will be launching a more business-oriented service called texticate with more features for businesses. LinkedCampus has a free account that handles up to 25 contacts and 25 campaigns per month with paid accounts featuring more contacts and unlimited campaigns.